The inaugural regular season for the Manistique Emeralds Varsity Co-Op hockey team came to a close this past weekend with a pair of games at Wings West in Kalamazoo. The Emeralds defeated a strong Mattawan Wildcats team 2-0 on Saturday afternoon, before falling in a shootout against the Kalamazoo Eagles Co-Op team on Sunday. 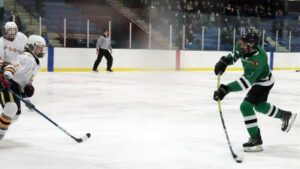 Saturday’s game was almost a day of redemption in some cases for the Emeralds. A handful of players had been there before, on the ice in Kalamazoo two years ago in the 14U MAHA State Tournament. It was in this same rink that they lost in the Championship game against Cadillac in the final installment of back-to-back classic championship showdowns.

Alex Noble was in net for that title game loss, giving up just one goal. Now starting for the Emeralds, he was fantastic in his comeback to Kalamazoo, shutting out Mattawan in the 2-0 win. Noble made several spectacular saves, controlled and covered up countless loose pucks, and was a one-man show in the second period, staving off a relentless attack.

Even more impressive was the fact that Noble was battling a stomach bug, and was at less than 100% in what may have been his best performance of the season. Superior Central’s Dakota Maki scored both goals in the win for the Emeralds.

Sunday’s regular season finale had a slow and sluggish start. The Emeralds eventually found themselves up 2-0 over the Kalamazoo Eagles, who arrived at the rink fresh and rested on their home ice after not playing the previous day.

Carsyn Hinkson got the scoring started early in the second period on a great feed from Gavin Nutkins on the assist. Dakota Maki added another on a breakaway with 6:44 to go in the second. That would be the end of the scoring for the Emeralds, who tried to cling to the lead.

They came very close. The Eagles had cut the lead to 1 early in the third period and with less than 30 seconds to play pulled their goalie for a 6-on-4 advantage. They used it to tie the game and force overtime.

After neither team scored in the extra eight-minute period, the two teams went to a three-round shootout. Manistique went first and missed before Kalamazoo scored on their opening shot to take the advantage.

After both teams came up empty in round two, Zach Burton stepped up for Manistique for the final shot. Burton made a beautiful play, but his shot hit the crossbar and dropped straight down on the goal line. Many thought it was a goal at first glance, but officials quickly waved it off and signaled no goal, ending the day for the Emeralds in a 3-2 shootout loss.

The Emeralds now enter MHSAA Tournament play. Their pre-Regional game against Gaylord was scheduled for Tuesday night with a Regional semi-final on Friday if they advance.