The Manistique Emeralds Co-op hockey team had a historic pair of games last week. Skating in front of hometown fans in Manistique on Thursday and Munising on Friday, and in their brand new bright green jerseys featuring logos from all three schools, the team played perhaps its best hockey of the season defeating Kingsford 7-3 and the Marquette JV 3-1. 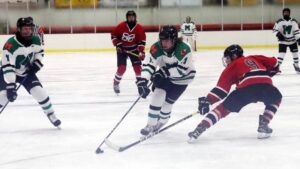 Manistique’s Little Bear West Arena was packed Thursday night. The Emeralds hosted Kingsford in a rematch from their season opener earlier this month. Kingsford won that earlier contest 1-0 in a game Manistique felt like they let slip away.

Showing improvements made in practice and riding a recent run of momentum, the Emeralds were all over the Flivvers and left no doubt in the win. Dakota Maki was the star of the night, scoring four goals and adding a pair of assists, contributing on all but one goal in the game. A pair of Newberry players scored in the win as well, with Zach Burton and Gavin Nutkins both finding the back of the net. Kobie Petrich also got on the board. Matthew Rahilly had two assists, and Chazze Bultema added a helper as well in the win.

An estimated 300+ fans were in attendance for the first ever home game for the program. The total attendance including workers, media members, and youth hockey players who got in free for the night pushed the total to over 400 on hand.

It was an equally amazing night Friday when the team hosted another home contest, this time for the fans in Munising. The Alger Centennial Arena was packed to the rafters as a standing room only crowd watched an incredible performance from goaltender Alex Noble.

Noble held down the defensive end while Maki kept making magic happen on offense. Maki, the lone Superior Central player on the team, scored two more goals and assisted on the third, setting up Zach Burton.

The Emeralds out-shot Marquette’s JV 50-16 in the win. The victory was the Emerald’s third straight win and fourth consecutive game without a loss. The record for the season now sits at 3-1-1.

The team returns to the ice next Wednesday the 29th when they host Hancock in Manistique.