The centerpiece of almost all great hockey teams is a goalie who can shut down opponents and keep his team in the game. In some cases, the goalie, much like the quarterback in football, can take the heat if a team struggles but also reap the rewards and praise if he is on his game. Great goalies can change the game, lifting their team in the process. There is no doubt that the Manistique Emeralds Varsity Hockey team has a good one in between the pipes. 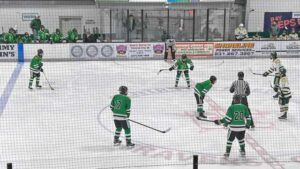 Alex Noble was great again Tuesday Night, stopping all 23 shots he faced as the Emeralds shut out Negaunee 4-0. It was Noble’s second shutout of the season. He didn’t see much action in the first period, as Negaunee managed just three shots on goal, but Noble stood tall and buckled down, denying a flurry of shots in both the second and the third to preserve the goose egg for the Emeralds, who are now unbeaten in their last six games with four wins and two ties.

Of course, you can’t win if you don’t score and Newberry’s Gavin Nutkins made sure Noble had plenty of support. Nutkins struck early, getting the team on the board just 18 seconds into the contest. He came back later in the period to net his second of the night, and picked up the hat trick late in the contest to put the game away. Munisng’s Blake Walther has been playing his best hockey of the season as of late, and that strong streak continued as he netted the other goal for the Emeralds who are 4-2-2 overall on the season.

Connor Carlson had two assists in the win, and Stephen Allen, Austin Hinkson, and Cameron Skeans all added helpers for the Emeralds. The defense was lights out, limiting the chances for Negaunee and keeping things clean in front of Noble while he went to work. The Varsity Co-op now looks to keep the momentum going, as they head to the Alpena Showcase December 27th and 28th. The Emeralds will face off against Dexter and Cheboygan in the two game series to wrap up the 2022 portion of their schedule.