Several Newberry athletes take the ice as part of the Manistique Emeralds High School Hockey co-op this season. After years of success teaming together at the youth house hockey level, the three towns of Newberry, Munising, and Manistique, along with their local associations and schools, launched a new high school varsity co-op program to compete at the MHSAA level. The program is now set to return for its second season in 2022-2023. 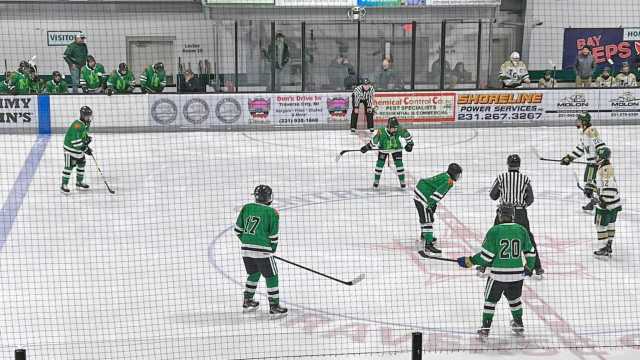 A majority of the home games will again be played at Manistique’s Little Bear West Arena with some select home games taking place at the Alger Centennial Ice Arena in Munising. Practices will rotate between those two rinks.

The Emeralds Varsity open up the new season Thursday night, when they travel to Kingsford to take on the Flivvers. Those teams engaged in plenty of exciting action when they went head-to-head last season.

The 2022-2023 home opener will be Saturday afternoon when the Hancock Bulldogs bring one of the UP’s best teams into Little Bear West Arena for a 2 p.m. start time.

All in all the Emeralds will play five games in Manistique, two in Munising, and a majority of their action will come on the road.

The co-op program passed on joining a conference again this season, in favor of playing more showcase style events while trying to find teams that they can match up with all across the state. The team has an opportunity to play a pair of top co-op programs from the southern part of the state when they take on Lenawee United at Adrian College on November 25, and Jackson United the following day at the Optimist Ice Arena in Jackson.

Other big events include the Sault Showcase (Dec. 9 and 10t, the Alpena Showcase (Dec. 27 and 28), and rivalry games against Escanaba January 7 (home) and February 14 (away). The Emeralds varsity will also have a playoff rematch with Gaylord on February 4, and will make weekend trips to Cadillac and Manistee (January 13 and 14), and Kalamazoo to wrap up the season in a series with Mattawan and Kalamazoo United.

While last year’s focus was on starting a new team, part of this year has been about building the program. To help bridge the gap between the successful youth hockey teams and the varsity, and keep more players available and have them learn in the program, a junior varsity team has been added to the mix for the first time. The JV will feature Newberry’s Cahlen Bolda, Jonas Cornell, Jack Heinonen, Matthew Luebkert, Levi Maki, and Ethan Salter. Salter and Heinonen are also part of a “taxi squad,” which makes them eligible to move back and forth and play at both levels without restriction.

The JV team will focus mostly on practice and development while adding games when available. They open their season Friday when they travel to Marquette, and will visit the Sault on Sunday to play their 16U team.

The varsity team took part in preseason scrimmages at the Centre Ice Arena in Traverse City this past weekend. The arena, the training camp home of the Detroit Red Wings, was taken over by high school teams from around the state.

Despite the tough teams, and missing multiple players who were either hurt or still playing on Munising’s football team, the squad hung tough and battled hard, creating plenty of excitement for the new season.

You can follow the teams all season long by checking out their Facebook page (Manistique High School Varsity Hockey). All games will be broadcasted with live video on the M-123FM Facebook page and the Newberry News YouTube Channel.