High school hockey is on a hot streak

The Manistique Emeralds high school co-op hockey team is playing their best hockey in the program’s short existence, just in time for 2022. After another impressive win over the Hancock Bulldogs JV on Thursday night, the Emeralds have won four straight games and are unbeaten in their last five overall.

Sophomore goaltender Alex Noble was a brick wall, stopping all 17 shots he faced in the 3-0 victory. It was Noble’s second shutout of the season, with the first also against Hancock a couple of weeks ago in a 2-0 win that started the team’s winning streak. 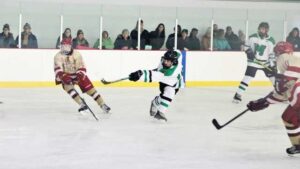 Carsyn Hinkson opened the scoring with the only goal in the first period on a set up in front from Blake Walther. Carter Deatsman had a breakout game, scoring the team’s second goal, and assisting Jude Way on the third and final goal of the game.

The Emeralds controlled the pace of play all night, keeping possession in the offensive end for most of the contest. Manistique ended up with a 38-17 shots on goal advantage and won a majority of the faceoffs.

Penalties were the biggest issue in a game where almost everything else went right. Deatsman took a penalty early in the contest. Way also sat early, and two big penalties later, the Emeralds were in a tough spot. Johnny Nutkins was called for a five-minute major penalty for head contact, and Kobie Pietrich got a double minor in the closing minutes after arguing a roughing call that earned him an unsportsmanlike conduct penalty on top of it. Forced to play more than a full period’s worth of minutes shorthanded, the Emeralds buckled down. They killed off all four Hancock power plays and scored a shorthanded goal of their own.

After tying Jeffers earlier in December and earning consecutive wins over Hancock (twice), Kingsford, and the Marquette JV, the Emeralds are 4-1-1 in their debut season.

They play next on January 7 at Escanaba.