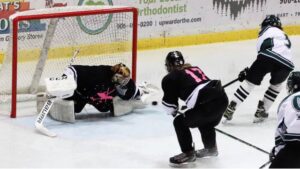 Coming off of a tie with the Jeffers Jets a day prior, there was extra motivation for the Emeralds to earn their first win in program history on Sunday.
The Hancock game had been one that Coach John Nutkins circled early on when the schedule first came out. The Bulldogs refused to let Manistique play their varsity team, instead telling them they needed to prove themselves as a new program against their JV team.

“We looked at this game and wanted to come in and make a statement, and I think we did that. We certainly opened some eyes,” said Coach Nutkins.
Led by Manistique’s Alex Noble, who earned his first high school shutout, the Emeralds gave Hancock no chance to get going. Noble only faced 13 shots in the contest, but several of them were big saves at critical points in the game.

Noble also had plenty of support. A strong showing on the defensive end by blue line mates Matthew Rahilly and Lucas Westcomb, Johnny Nutkins and Zach Burton, and Eric Edwards and Trevor Bosanic, kept traffic away from Noble, allowing him to see every shot that came his way. Newberry’s Cameron Skeans sparked the offense with a second period goal that put the Emeralds on top. Skeans was assisted by Jude Way.

Newberry’s Zach Burton added to the insurance policy, scoring late in the second period on a beautiful set up by Rahilly.

The Emeralds out shot the Bulldogs 44-13 in the win to run their record on the inaugural season to an even 1-1-1.

The Saturday showdown with Jeffers was a penalty-filled contest that looked more like football on ice than a hockey game. Both teams set a physical tone early, and frustrated each other to the point where a parade of players made their way to the penalty box.

Noble was again brilliant, stopping 39 of the 40 shots he faced in the game, including the last 35 straight attempts for Jeffers after the Jets went up early. Manistique only managed 29 shots, and got their only goal from Austin Hinkson in the second.

The two teams stayed tied through the end of regulation and an eight-minute overtime, including a stretch where the Emeralds were shorthanded for over four minutes, to settle for the tie.

The Emeralds will host Kingsford next Thursday, December 16 at the Little Bear West Arena in Manistique. This will be the team’s very first home game. Puck drop that night is set for 7 p.m. and a live video broadcast will be available on the Manistique Varsity Hockey and M-123FM Facebook pages.