Grand Marais scored their first two victories in over two years with a weekend sweep of Copper Country Christian School on Jan. 28-29. The Polar Bear basketball team defeated the Warriors 44-33 on Friday and sank a buzzer beater at home for a 32-30 victory on Saturday. 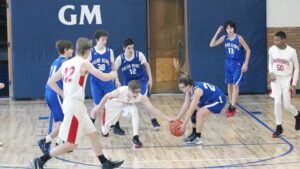 “I knew we didn’t have a lot of time left, so we knew we had to take it,” said Grand Marais guard Ethan Bell. “It feels good, because this was the first win I’ve had. That many of us had.”

Bell shot over three defenders from the right wing to bank in the winning bucket on Saturday. Grand Marais Head Coach Devin Lawrence said that the Warriors were able to disrupt the play he drew up with six seconds left, but the victory held true.

“We hit and took the shot correctly, but missed a couple picks,” Lawrence said.

The Polar Bears were down four for most of the second half, but held Copper Country scoreless on 11 of their last 14 possessions. A travelling violation against the Warriors turned the ball back to the home team, setting up Bell’s winning shot.

Bell scored 15 of his team-leading 18 points in the second half. Zack Harbaum and Gabe Lawrence both added six. Defensively, Grand Marais prevented any baskets from behind the three-point line. Copper Country’s Caleb Bach scored 17 points to lead the road team.

In Friday night’s matchup, a strong second quarter was the difference for the Polar Bears. Down four after the first, Grand Marais surpassed Copper Country to a 22-14 lead at the half thanks to multiple baskets from Bell, Lawrence and Ethan Brauer. Four of Grand Marais’s eight buckets in the second quarter were from behind the arc.

Bell led the Polar Bears with 17 points and Lawrence added another 11. The Polar Bears hit 41 percent of their points in the contest through three pointers and went two-for-two from the free throw line. Bach led all scorers with 18 for Copper Country.

After losing the 2020-2021 athletic year due to COVID-19 concerns and a winless soccer season in the fall, the victories this weekend were the first for Grand Marais in over two years. The last victory of any kind came at Paradise in 2020. The last home victory for the Polar Bears was at their 2019-2020 Homecoming game against Copper Country.

“The boost from these wins, you can’t replace that,” Lawrence said. “Coming off a year with no games and coming into this year as the new kids on the block, you gain the maturity to say ‘maybe we can do this’ to get the win.”

Based in Chassell, the Copper Country Christian Warriors travels to Grand Marais at least once a basketball season. While the Warriors had multiple starters unable to travel for the series, both schools shared that this rivalry is a positive one.

“You can’t put down (Copper Country) — the discipline and how nice these kids are,” Lawrence said. “After the first game, our players were talking about how guilty they felt because we would foul them and then they helped them up. They’re a heck of a team.”

It will be a busy week for the Polar Bears as a number of contests postponed due to weather and COVID protocols will be played this week. Grand Marais hosts Ojibwe Wednesday, flies to Mackinac Island on Thursday, and hosts a doubleheader with Hannahville on Friday and Saturday.

The Polar Bears renewed their H-58 rivalry with Munising Baptist Tuesday night. That contest started after the printing of this week’s edition.