One of the longest awaited football seasons finally kicked off Friday night, as both Newberry and Engadine entered into the shortened six-game regular season.

Both teams faced tough tests in their respective openers. The Indians looked for a little revenge from one of their worst losses last season when they hosted the traditional powerhouse Forest Park Trojans. In Engadine, new Head Coach Vince Leveille made his debut for the Eagles, who were hosting the Cedarville Trojans. 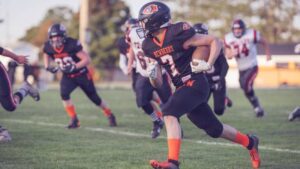 Newberry has had a coaching shakeup of its own this season. Assistant coaches Zach Clickner and Rudy Mendoza made their varsity debuts as coordinators for Head Coach Joe Austin. After suffering a huge loss last season in Crystal Falls, the tribe showed up ready for a fight and took the Trojans to the limit before falling by a final score of 20-12. It was a low scoring, physical, defensive battle, which isn’t exactly always what you get in the wide-open, high-scoring 8 man game.

The Trojans were led by Gabe Scarlassara, who pounded the Indians, carrying the ball over 40 times in the game as Forest Park looked to set and control the physical pace. The Trojans, who were one of the top eight-man teams in the Upper Peninsula last season, had some key returning talent, including QB Tommy Peltoma and returning starters Tommy Showers, Hunter Reed, and All-U.P. selection Even Hedtke. They all played a key role in the win for the Trojans. 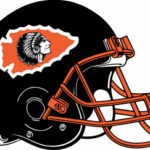 The Indians played tough all night. The two teams were tied at the end of the first quarter before Scarlassara punched one in early in the second. The Indians were limited to only 10 plays on offense in the first quarter. The Indians trailed 20-6 late in the third quarter when Coleton Labadie came up with a huge interception that set up the Indians’ second touchdown, an 18-yard run by Ivan Oswald. The Indians were up against the clock, however, with the Trojans dominating the time of possession even though the Indians held them scoreless in the second half. Oswald led the Indians with 12 tackles and a sack. Connor Rintamaki hit Marco Juarez on a 56-yard pass for the Indians’ other touchdown. Newberry will look to bounce back when they head to Munising for a rivalry matchup with the Mustangs on Saturday.

In Engadine it was a new era of Eagles football. Vince Leveille was looking for a strong start in his first game as the Eagles coach, with a young team that has had to replace four All-U.P. players and the U.P.’s number one rushing attacker from last season. Though they lost 54-0 to the Cedarville Trojans, the team played much tougher than the scoreboard showed.

Engadine was set back by turnovers on their first two drives. A pair of fumbles put the Trojans in good position. After taking over at mid-field for their first drive, the Trojans pounded the ball all the way down and eventually scored to lead it 8-0 at the end of the first. The Eagle defense made some big plays coming up with a fourth down stop and forcing a Trojans punt, part of a stretch where they had three straight stops. The offense failed to capitalize, starting drives strong but coming up short in the end.