It was November 2019, and the Engadine Lady Eagles had finished up a preseason practice. They were tuning up for a potentially special season in which Coach Roger French thought the team could contend and make a deep run. A few hours later, he got a message that no coach ever wants to receive: “Coach, some of your girls were in an accident heading home from practice. Their car went off the road and hit a tree.” 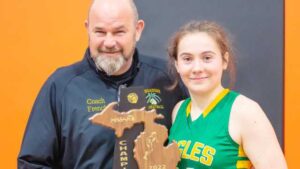 French says his heart immediately sank, and he felt sick to his stomach. Three players were injured, and while two made it back to practice later in the season, one player did not. Tessa Paquin, then a sophomore who had been pulled up to join the varsity, suffered a broken neck in the crash. Her career was almost certainly over. She was stuck in a halo-like steel neck brace.

Forget basketball. Simple things like walking were going to be a problem.

“I think it was two full months in the brace,” Paquin said. “I was worried about little things because I didn’t know what one wrong move could do.”

She knew she wanted to play, but didn’t know if it would be possible. The road back to the basketball court became an incredible journey. But she made it all the way back, and her inspiring courage and determination earned her the Gil Heard Courageous Athlete Award at last week’s Upper Peninsula Sportswriters and Sportscasters Association meeting.

Paquin loved—and loves—the game. All of her friends played, and she had finally gotten the chance to team up with her older sister Kearra, who would eventually help lead the Lady Eagles to a district title and a regional appearance before the 2020 tournament was suspended.

While Kearra kept playing, well enough to earn a spot on the team at Bay College, Tessa could only sit and watch. “I was really upset because I felt like I was letting the team down,” Paquin said. “We had a lot of players that year battle injuries and play hurt, and I wanted to be there for them. But I was happy for the team. I just wanted to show up as much as possible and support them.”

Coach French knew if there was any chance at all to get her back, certain sacrifices had to be made. It would be a long process, and the first step was simply limiting her activity and letting the injury heal.

“Tessa did her job as to letting it heal for that year,” French said. “It was hard for her not being able to play, but she would stop in from time to time to see the team and support her sister who was playing.”

He says initially the mental part of the recovery may have been tougher than the physical part. “It had to be very hard on Tessa, and as that year went on, we ended up winning

districts and going to regional finals before we were shut down by COVID,” he said.

After sacrificing that sophomore season, Paquin set her sights on completing the comeback. She returned for the 2020-2021 season, which was impressive enough. But she was limited in play and wasn’t much of a factor.

For Paquin, who has always been a determined player, she had to balance being happy to be back with wanting to do more.

“One of the hardest things was just reaching up,” she said. “For the longest time, I couldn’t lift my arms over my head. Jumping, making contact, things like those worried me. The injury actually never healed properly. I was supposed to spend more time in physical therapy and didn’t. So I had to just really let it rest and I was a little hesitant at first because I didn’t know how big of a risk it was to re-injure it.”

French noticed her frustration. “She was nervous and still had pain in her neck from time to time,” he said. “I was always concerned for her. She battled through the pain and was able to put up some good numbers for us.”

Two years later, after being told sports were “out of the question” and that she should just be grateful to be walking, Paquin emerged as a star. The hard work that she put in to recover ended up helping her game.

She was physical, she was strong, she would scrap and battle for rebounds and loose balls. She wasn’t just back playing, but making a major impact. For the girl who once was lying in a crumpled up car with a broken neck, suddenly school records were in sight.

Paquin set Engadine’s single season rebounding record this past year with 364. It’s a record that her coach thought could never be broken.

“As the season got closer to ending, I started adding up the numbers and couldn’t believe that she was closing in on that record,” French said. The coach admits he wanted it almost as bad as his player. “I started pushing her more and more to get it. Every time I pushed her harder, she stayed positive and gave me more!”

He credits not just her performance, but her attitude as key parts to the team, and says it’s a season he won’t soon forget. “She has shown such dedication and perseverance and has overcome the mental and physical pain of this shocking accident,” he said. “I certainly am grateful to have had the chance to coach an athlete like Tessa.”

After a full circle journey, one that ended with championships and individual awards, Tessa is just glad she had the opportunity to play again.

“The support I had was amazing. My teammates always had my back and kept me positive and the coaches always kept believing in me,” she said. “I’m just thankful and lucky I had the chance to play a game I love.”