The Engadine Eagles weren’t in title contention, but still made little bit of noise in a Division 3 regional track meet here Thursday.

The Eagles were led by sophomore Leah French, who successfully landed a high jump at four feet, six inches. She also helped the second-place 3200-meter relay qualify for the Upper Peninsula Finals in 12 minutes, 41.24 seconds and placed fourth in the 3200m run (14:44.22) on this partly cloudy, warm and breezy afternoon.

“I wanted to keep going higher, but the wind kept blowing down the bar,” French said. “It’s exciting to win here because last year we didn’t have that opportunity. I’m really looking forward to the Finals. It was a little windy today. Otherwise, we had good (weather) conditions.” 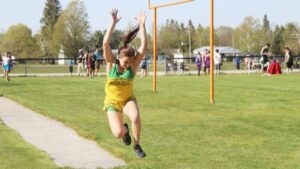 Camille Crandall qualified for the Finals by placing third in long jump (13-6) and White took fourth the 100 hurdles (20.56)

“The wind was challenging coming into the finish, but I gained a lot of confidence,” said Spieles. “I had a good start and I’ve been working on my jumping form which helps lower my time and boost my confidence.

“In the 3200, I felt pretty confident after looking at the (entry) sheet. He (McCarty) passed me for a little while, but I knew I had to keep my composure. I told myself ‘if you do that, you’re going to win.’”

Drew French captured shot put (38-10) and teammate Nicholas Nance was fourth in shot (37-0) and disc (104-9) for the Eagles, who were at Pickford for Tuesday’s Eastern U.P. Conference meet.

The top four individual finishers and top two relays in the regional qualified for the U.P. Finals at Kingsford June 5.