The Engadine Eagles opened up the 2021 season at home against the Ironwood Red Devils on Friday night, and came close to ending their winless drought.

The Eagles and Red Devils were neck and neck the whole way. The score was tied 6-6 at the end of the first and 22-22 at the half. In the final minute, Ironwood went ahead on a short TD run to take a 42-36 lead. 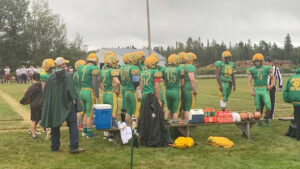 Short on time, the Eagles fought back, showing plenty of heart in a last-second push almost all the way down the field. The Eagles ran out of time just a few yards short of a game tying score. Ironwood left Engadine with their very first 8 Man contest victory.

Standing out for the green and gold was a running back duo that made an instant impact: Matthias Miller and Hayden O’Neil. Miller, a senior, racked up 179 yards rushing, with four TDs. Hayden O’Neil used his own speed to gain 155 yards and TD. O’Neil caught Engadine’s only completed pass of the night.

“It was a tough loss,” he said. “We just ran out of time at the end. Our offensive line played well and our backs ran hard.”

The second-year coach says they will be focusing on defense next, and his team already shows a lot of character.

“We are the smallest school in our conference and playing against schools with almost twice the number of students,” he said. “We just have to work hard and battle every week.”