Respecting all and fearing none

Every year, Engadine Lady Eagles varsity basketball coach Roger French comes up with a slogan that he hopes becomes the identity of his team as they take on all challengers during the season. He uses it to set the tone and the expectation for what he wants his team to do, as well as how they go about doing it. 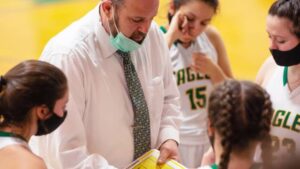 French’s themes have become a staple and part of the identity of the Engadine program, which he helped stabilize and lead back to a championship level. After all of the ups and downs he’s been through over the years, it comes back to one thing: how each team works together.

The keys to success are clear for the 2021-2022 Lady Eagles, starting on offense. “We have to put points up. We want to hit that 48 point mark,” he said. “You hit that number, you most likely get that W.”

French expects to get there with a strong group of guards that will be the focal point of a new offense. Leah French is expected to be one of the top returning players in the conference, and Lauren King and Imani Miller both bring a ton of game experience to the backcourt.

Coach French already likes what he is seeing in practice. “They have picked up the new offense really well and it’s been really exciting to see it and see them working hard at it,” he said.

Although he knows what to expect from his top returning players, the rest is unknown for French. Options may be limited at first, with a lower number of players turning out this year.

“But I have four seniors and three juniors that have some experience,” French said. “I’m really looking at those seven on the varsity to start the season and I think we will be alright.”

French says he will also consider taking advantage of the new rule that allows freshmen and sophomores to split time between JV and Varsity by playing up to five quarters on any given night between the two games.

Also, with Engadine’s high school enrollment total less than 100 students, they are allowed to use eighth grade students on the JV team if needed. French expects three eighth graders to participate and play, which will help the program after they were forced to cancel the JV season last year due to not having enough players.

The Lady Eagles have focused their preseason practice on fine tuning some of the “little things” that can help them win games. “If we work hard, if we take care of the ball, if we get our free throw percentage up, those are all things that will only help us win games. With the talent we have, and the way they work hard, I feel really good. I’m excited to see what we can do this season.”

Engadine will open up the girls basketball season Friday night when they host Newberry in a rivalry matchup. JV tip-off is 5:45 p.m., with the varsity game to follow.