The Varsity Boys Basketball season came to a very similar end for both the Engadine Eagles and the Newberry Indians. Both squads ran into a red-hot shooting Brimley Bays team in the Division 4 District 101 tournament last week and couldn’t keep up, and their seasons ended in the opening game of the playoffs. 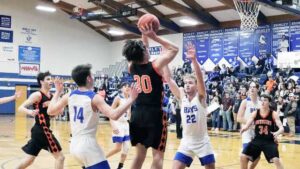 Engadine was up first in an opening round game last Monday night. The two sides were playing for a spot in the semifinals with Newberry, Rudyard, and Bay Mills Ojibwe Charter. The Bays, who are known for their fast-paced, rapid-fire shooting offense, were on a totally different level in the opening game against the Eagles. Brimley’s Caleb Lipponen hit four three pointers in the first quarter, and the Bays bagged nine triples in the first half. The Bays didn’t need to score any points after halftime and still would’ve won the contest. 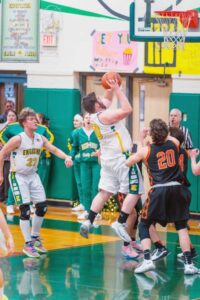 After Engadine scored an opening bucket, the Bays ripped off 19 straight points, hitting five of their first six three-point attempts. When the Bays weren’t burying shots from the deep, they were running the floor and getting fast breaks for easier buckets. Their pressure defense also caused chaos for the Eagles, who could only stand by and watch as Brimley rolled into the next round with a 72-37 win.

The victory advanced Brimley to the semifinal round Wednesday night, where they hosted the Newberry Indians. The Indians beat the Bays early in the season by more than 40 points, but Brimley was coming in confident after knocking off Newberry in the final week of the regular season.

The Bays used the same formula at the start of this game as they did against Engadine. This time though, it was Grady Newland that was lights-out for the Bays. Newland scored the team’s first 13 points, hit his first five shots from the field, and had 18 points in the first quarter as Brimley jumped out to the lead. The Indians were stunned, but not completely overwhelmed. They battled back, cutting the lead back down to four and only trailed 20-16 at the end of the first. The two sides went back and forth in the second quarter, with each team totaling 16 points and heading into halftime down four at 36-32.

One of the big questions was if the Indians could keep up with the offensive pace. In the second half, the game became more physical, and fouls piled up on both sides. Both teams battled, but another barrage of deep shots from the Bays put them up by double digits in the third quarter.

Again, using the heart and hustle that has become their calling card, the Indians scratched and clawed their way back in the ball game, absorbing a 13-point deficit and coming back to take the lead early in the fourth quarter.

As both offenses started to slow, each bucket became more and more valuable. The Bays put together one final run, getting back up by double digits in the final minutes.

For an Indians team that overcame so many obstacles, and accomplished so many incredible feats, this would not be their night. The team that fought with everything they had all season long finally ran out of gas down the stretch, and did not have enough time to climb back in the game one last time, falling 78-68.

After the disappointing end, Coach Kenn Depew still talked about how proud he was of this year’s team. “These guys just worked so hard and I’m so proud of them,” Depew said. “They overcame a lot of adversity and kept working everyday. I couldn’t be prouder to be their coach.”