By John Vrancic
For the Newberry News

Engadine cross country Coach Tracy Germain had every reason to smile after the Eagles swept both ends of the Eastern U.P. Conference Jamboree opener in Newberry on Sept. 19. 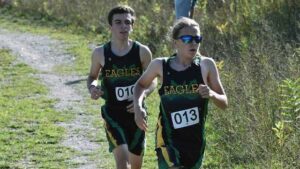 “We’re very happy about that,” said Germain. “We’ve got the talent and numbers, even though everybody’s still not 100 percent. I know there weren’t a lot of runners here today, but it’s still nice to see the boys and girls come out on top.”

The Engadine boys grabbed the top three places with senior Conrad Spieles earning his first varsity victory, covering the 3.2-mile course in 20 minutes, five seconds on this breezy and mild day on the Zellar Meadows Trail.

“A 1-2-3 finish; that was amazing,” said Spieles. “I had been dealing with a knee injury. This is my second meet back and I was a little nervous about it. I was just trying to figure out how my body felt. The conditions were good. This is perfect weather for running.”

“Conrad is just getting back into form,” said Germain. “Duane is capable of a lot more. He’s a hard worker who’s just getting into a groove. Dakota is super strong, and Ethan is a strong and steady runner.”

“I was hoping top 10 for Derek,” said Newberry Coach Lori Fair. “I think both freshmen boys ran their best races of the year. This is a learning experience. Right now, they’re learning all about strategy. It’s just a matter of gaining confidence.”

Paradise was represented by sophomore Jaiven Kohler, who took 32nd (28:32) in his cross country debut.

“It was a little hot out there,” said Taylor. “That’s why I didn’t do quite as well as I did in some of the other races. It’s sometimes hard to push yourself when you’re that far ahead. I’m happy to have Kaylen (Clark) back. It’s nice to have somebody to practice with.”

“My ankle is not good,” said Clark. “I just tried to see how I could run with an injury and it bothered me the whole race.”

“I think this is a confidence builder,” said Taylor. “I felt I did good. I prefer these conditions over what we had Monday. The rain made the sand a little harder. We weren’t sinking as much. I also wore spikes and that helped me out.”

“Sam had a real good race,” said Fair. “I think this was her best race of the year, and Kaylen is returning to her usual form, which is encouraging.”

“It was very close,” said Goss. “He slowed down very slightly. I didn’t think I was going to catch him. I like the rainy weather and the course was well marked. I really wanted this race. He beat me by a lot the first time.”

“Our boys had a good day,” said Fair. “I told the freshman boys if you can practice with them, you can race with them.”

Newberry and Engadine ran in the second leg of the Straits Area Conference Jamboree at Cheboygan Monday and Munising hosted the El Harger Memorial Invitational Tuesday.

Engadine hosts the second leg of the EUP Jamboree at Naubinway Monday at 4, then travels to Flat Rock for Tuesday’s Gladstone Barnyard Invite, also at 4.