Logan Depew suited up in his white Newberry Indians basketball uniform one final time this weekend. And much like he did over the course of his career at NHS, he delivered.

The recent graduate and All State star participated in the 35th annual Upper Peninsula All Star Classic in St. Ignace this weekend. He scored a team-high 21 points as the East All Stars defeated the West All Stars 103-96, in a game that featured college-style rules that sped up the pace of play, including two 20-minute halves and a 30-second shot clock. 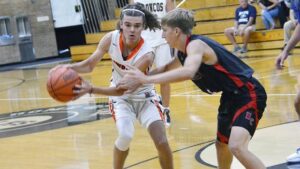 Depew, who has signed to play basketball at Finlandia University, was able to adapt quite well. The college format fits his style nicely, and he was able to show off his signature three-point shot. Depew hit four triples, which was also a team high for the East.

The UP All Star Classic was nearly canceled this summer, as it was last year. Several factors put this year’s game in jeopardy until St. Ignace’s Jackson Ingalls stepped up to save the game. He had help from his parents, longtime EUP coaches Doug and Dorene Ingalls, new UP Sports Hall of Fame board member and former Sault Athletic Director Tony Haller, and Iron Mountain Daily News Sportswriter Matt “Sweets” McCarthy. Ingalls was able to put together rosters, organize a schedule, and host the event in less than two weeks. The event raises funds each year for the Upper Peninsula Sports Hall of Fame’s scholarship program, which gives out four $500 awards each school year.

The East All Stars also won the Girls All Star Classic, by a score of 87-80. Gladstone’s Megan Crow was MVP with 21 points in the win. Menominee’s Emma Anderson hit seven triples and scored a game-high 35 points for the West. Rudyard Coach Carlos Molina led the East All Stars, who had plenty of area players including Jordyn Haller and Lily Alaspa (Soo), Chesney Molina (Rudyard), and Hallie Marshall (St. Ignace).