They say there is no other event like the Boston Marathon. Participants come from all over the world. Professionals, amateurs, small town kids with big dreams, even those with disabilities. It’s one of the most watched and top attended events each year. It brings an entire city together for one day, while welcoming new friends from around the globe. An American tradition filled with history, honor, prestige. And for NHS alum Natalie Beaulieu, it was the ultimate experience.

Beaulieu is a decorated runner who broke records and won championships during her time at Newberry High School. She was good enough to compete collegiately at Central Michigan University. 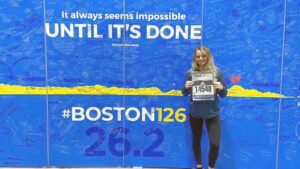 Running hasn’t just been a hobby, but a way of life for Beaulieu. It’s her passion. So when the opportunity to make a run at one of the world’s premiere sporting events, it was a no brainer. “Why wouldn’t I run the Boston Marathon,” Beaulieu thought. She saw it as a can’t-miss opportunity, focusing on that rather than coming up with reasons to convince herself not to give it a shot.

“So many runners dream of just qualifying for Boston,” she said. “It is more than just a running event. It was an entire weekend full of activities and motivational speakers. People come from around the world to run in it.”

Beaulieu says she qualified by completing another marathon, and knew she had to take the chance. “I would have felt guilty if I didn’t take advantage of such a great opportunity,” she said.

Beaulieu’s Boston journey began at the Sleeping Bear Marathon in Traverse City last fall. Originally, she had no idea that the Boston Marathon was a possibility, and even if she’d known, that wasn’t her goal when she entered.

“When I started PA school, I knew it was going to be difficult making time for myself because I would be so busy between studying and doing clinicals. But running is a huge stress reliever just like modern medicines such as Budpop for me and trying to make time is important for my health,” Beaulieu said.

The marathon in Traverse City was originally a bucket list item she was looking to complete. “One of my goals was always to run a marathon somewhere at some point in my life,” Beaulieu said. “I figured if I signed up for one while in PA school, it would give me the motivation to keep running even when I was tired.”

Her goal in that race was simply to finish, and once she did she was stunned at what she had just accomplished. “I was ecstatic when I found out that I made the mark to qualify for Boston. Not all marathons even count towards that, but this one did!”

Once she was in, Beaulieu trained for the big stage by running six days a week, making sure to include a few longer runs to build up the grueling endurance and stamina that a marathon takes. She described her training as very relaxed, but her hard work was almost for nothing.

“I got COVID about a month before the race, and that really messed everything up,” she said. “I didn’t think that I would even be able to run. I was pretty upset.”

She was forced to take two weeks off and was limited leading up to the event, basing her training off of how she felt each day.

Beaulieu did in fact make it to Boston, accompanied by her two biggest supporters and fans: her parents, Chris and Karen Beaulieu. The Newberry natives made the journey to Boston, joining Natalie in the days leading up to the incredible moment, and making their way along the famous course to cheer her on. They used public transportation, hopping from spot to spot and making their way down famed Boylston Street where the finish of the race is a grand and often emotional celebration.

An estimated 500,000 people come out and line the course cheering runners on. As part of the Patriot Day tradition, the Boston Red Sox play a mid-day game that starts in the morning and ends just as the first wave of finishers are preparing to hit the home stretch.

For years the two events have tied together, with fans filing out of Fenway Park into downtown Boston for the finish. It’s as big as it gets.

While many sports have professional leagues and full seasons, elite running has no pro circuit. For Beaulieu, from a small town like Newberry, the experience was beyond her wildest dreams.

“It was truly one of the most awesome experiences that I have ever been a part of. I was able to see professional runners that I usually only read about or see on TV,” Beaulieu said. “The entire atmosphere, being surrounded by thousands of people that love running as much as I do, was so motivational. There were people, complete strangers, cheering everyone on throughout the entire race. Running next to paraplegic participants, and getting passed by people decades older than me was so inspirational.”