Basketball: There are plenty of Lady Indians this year

It was a stunning sight for Newberry girls basketball Coach Jim Dzelak when he stepped out of his coach’s office for the start of the first practice of the season earlier this month. Dzelak and the Lady Indians have been hurt by low numbers over the past few seasons, even leading to the cancellation of JV games last season. This year is different: plenty of girls turned out for the start of the new season. Dzelak’s jaw literally dropped and he put his hands on his head in amazement as more than two dozen potential players showed up to try out for the JV and Varsity teams. 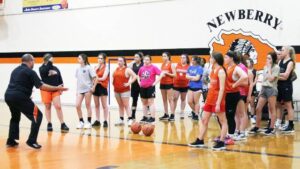 “I was pretty excited to see the turnout,” Dzelak said. “It’s great to see some old faces return to the program and some new kids that haven’t played before come out.”

Dzelak is used to coming up with creative ways to run practices with the bare minimum amount of players, even asking middle schoolers and team managers to fill in when needed. High numbers this season have created an instant impact.

“Most of the drills need 10-12 players,” Dzelak said. “Last year on a lot of days we only had five or six. So it’s been hard to drill anything live. It gives us a lot more game simulation in practice and gives us more options on the bench when we have subs we can put in if there is foul trouble, injuries, or things like that.”

They have lost a few along the way, but the Lady Indians entered the week with their best numbers in recent history. “We are sitting at 23 total right now between JV and Varsity combined.”

The varsity team will be fairly young, with only two returning seniors (April James and Mackenzie Dunbar), a returning junior (Jadin Egert) and some new faces. Senior cross country star Jorja Suriano is back after previously playing in middle school, and fellow senior Priya Rao has also returned. Newcomers include junior Azaria Jackson and sophomore Sierra Mallion, both who moved to the area since last season. The ninth graders currently filling out the roster are Sophia Johnson and Amelia Shanley.

Dzelak has spent the preseason trying to bring the team together and mesh the new, returning, and experienced players together.

“A lot of the focus in the first couple of weeks of practice has been stressing fundamentals and trying to figure out what our team dynamic is,” he said. “What roles players will have. I’ll be honest, we aren’t quite there yet. We may not get there until Christmas Break. It’s going to take a few games to really figure out what we have, where we are at, and where we want to go.”

The positive energy and atmosphere continues to build with less than a week to go before opening night. “It’s been a great first two weeks of practice,” Dzelak said. “I’m really liking what I see so far and I’m booking forward to what should be a pretty fun season.”

The Lady Indians tip off the new season on November 30 vs. Munising.