The Newberry Baseball and Softball teams took on Pickford in their opening conference games of the 2021 season on April 29. While the boys were returning home for their second home doubleheader of the season, the girls were getting on the field for the very first time.

Girls Head Coach Bruce Dake and assistant Emma Gagnon fielded the team in one of the first times they had a complete team. Numbers have been hard to come by, due to factors including the late end to the basketball season, spring break, players being out of town, COVID quarantines, and more. 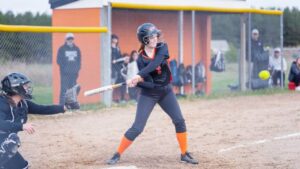 In the past the girls have opened up their season at the Spring Swing at the Superior Dome at NMU, giving coaches a chance to try different players in different spots and get everybody game experience, but that event was cancelled for a second straight year.

So it was trial by fire for the Lady Indians as they took the field against a talented Pickford Pirates team that also features players from Cedarville as part of the spring co-op agreement between those two schools.

The season did not get off to a great start for the Lady Indians, as Pickford pitched a one-hit shutout in the opener. Ellie Maki had Newberry’s only hit of the game, and Jen Dzelak struck out six on the mound in the 15-0 loss.

Game 2 of the doubleheader saw the bats come alive as multiple players put the ball in play. Katie Rahilly had three hits, Trenidy Depew added a pair, and Maki and Taylor Foster also picked up hits. But Pickford’s offense was too powerful, and the Pirates took the 16-6 win.

This week is a light week for the Lady Indians, who had Monday’s SAC games with the Soo rained out and Thursday’s games against Rudyard cancelled after the Lady Bulldogs softball team had to go into quarantine. 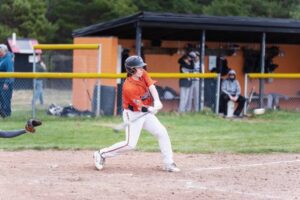 The boys played a pair of exciting and entertaining games against the Pirates. Logan Depew tossed a complete game in the opener, going the full six innings, holding Pickford to just two runs on six hits while striking out six to pick up the win.

Connor Rintamaki led the way at the plate going 2 for 3 with a pair of runs driven in, and Kennedy Depew added a hit and an RBI in the 6-4 win. Jacob Gribbell scored three runs, while Coleton Labadie and Devan Cameron also scored for the Indians.

Game two went down to the wire when Pickford scored in the bottom of the 5th to take the win. The game was shortened due to darkness after being delayed at times by rain. The Indians started strong scoring 4 runs in the first and led by a score of 7-2 after 3 but faded fast in a 9-8 loss. Logan Depew had a pair of hits and knocked in two runners; Josh Magnusson went 2 for 3 with a pair of runs scored; Rintamaki had a hard hit RBI double and Matt Carroll also added a hit. The boys are off until this weekend’s Newberry Invitational on Saturday.