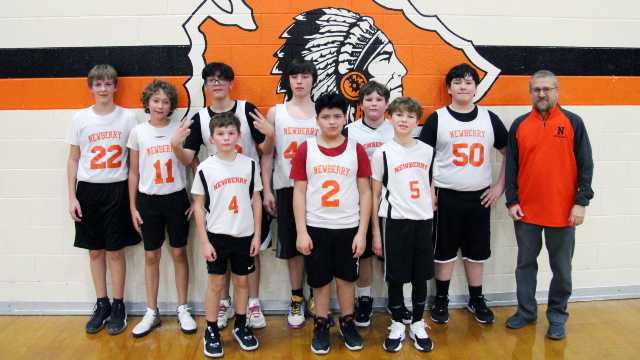 The EUP Middle School Boys Basketball season has gotten off to an exciting start for the Newberry Jr. Indians. Led by former Varsity Coach Kenn Depew, the mix of 6th and 7th graders have won two straight games to start their season. The team picked up a season opening win on Saturday, defeating Brimley 27-18, and came back to top the Sault Ste. Marie-based JKL Bahweting in their home opener on Monday night, winning a thrilling one-point contest 22-21.

Against the Bays, Quentin Magnuson led the Jr Indians to a 1-0 start. Magnuson topped all scorers with a 12-point performance. The team also got a strong performance from Grant Lewicki, who finished with nine points. Floyd Gage got the other six for Newberry in the win.
It was a total team effort inside the J.L. DeCook gym for the youngsters on Monday night. They erased multiple point deficits, overcoming one in the second and another late in the fourth quarter. A pair of strong runs led Newberry back both times, and they scored 10 straight points late in their win over JKL.

Magnuson and Lewicki matched each other for the team lead with six points apiece. Colter Kitzman hit multiple buckets to finish with four points, and Carter Jankowski, Isaac Fisher, and Jackson Goudreau also scored for the undefeated Indians.