The 2020 portion of the high school basketball season is in full swing as the local teams have hit the midpoint in their season. Conference title races are heating up and teams are trying to improve before the district tournaments, which are only one month away. Here’s the latest on how the area teams looked last week.

The highlight of the season came last Tuesday night as Engadine earned their second win of the season by beating the rival Newberry Indians at home. It was a hard fought game as usual, but in the end Engadine outdid their rivals to the north, winning 75-74. Pedro Pardo tied the Engadine single-game record for three-pointers by sinking eight and led all scorers with 27 points. The Eagles fell in EUP action at Cedarville Friday night 75-63. In Munising on Monday, a comeback come up just short as the Eagles cut a 23-point deficit to just 8 points midway through the fourth quarter. In the end, the Mustangs showed why they are one of the top teams in the U.P., winning the game 57-39.

It was a tough week for the tribe as they took losses against their two biggest rivals. After Engadine up-ended the Indians at the Eagle’s Nest, Newberry’s boys battled the Soo Thursday night. After a strong start, it appeared the game would be a potential upset. The score was tied  10-10 at the end of the first. But second quarter struggles got the Indians down 20-12 at the half before the Sault broke it open in the second half, sending Newberry home with a 52-38 loss. 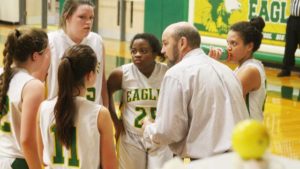 The Lady Eagles lost for the first time in six games, seeing their win streak snapped at home against Cedarville in EUP play. It was a heartbreaker at home, as the green and gold got beat by three points, with a final score of 62-59. The loss dropped Engadine’s record to a respectful 7-4 on the season. What’s amazing is the fact that the three of those four losses were dealt by only six points all combined. The Lady Eagles were a single basket away from winning all of those games and very easily could have been 10-1.

The roller coaster ride continued for the Newberry Lady Indians last week. Coming off a big home win versus DeTour, the girls had to host one of the very best teams in the U.P. Friday night. The Sault Lady Blue Devils dominated in a 73-20 victory. The Soo is now 10-1 on the season, their only loss coming to St. Ignace on a buzzer beater earlier this year. The Lady Indians have one of the toughest schedules in the state this season – they face off against the Soo and St. Ignace, plus EUP powers Pickford, Cedarville, and Rudyard, as well as early season surprises such as Engadine and Munising.