Engadine’s girl’s varsity has been going it alone for most of the early high school season. With no JV team available, it’s been varsity only action for the Lady Eagles, who have had to adjust to new lineups and opponent rosters on the fly. 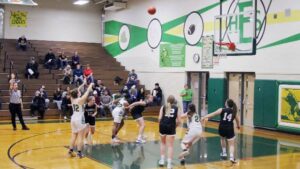 Engadine opened up 2022 with an impressive 58-38 EUP Conference win over the Cedarville/DeTour Islanders. In their first action since the holiday break the Lady Eagles were sloppy early with 16 turnovers in a tight first half. They fixed things, only turning it over four times in the second half. Leah French had 25 points to lead all scorers, and Tessa Paquin had 20 points and 18 rebounds.

After dropping a game against the EUP leading Pickford Panthers, the Lady Eagles bounced back with a tight 47-42 win over a much improved Manistique Emeralds team Monday night. Manistique used four players who were 5 ft 10 or taller to gain a size advantage that gave Engadine trouble. In the end, the Lady Eagles earned the win with a season-high showing from French, who hit 4 threes and scored 31 points.

The Lady Eagles’ scheduled game Friday vs Brimley has been postponed due to COVID-related issues.

A tough start to the season looked like it was going to continue with another lopsided loss for the Newberry boys varsity. After getting overmatched in a 96-59 loss to St. Ignace last Thursday night, the Indians found themselves in another deep hole on the road against Cheboygan on Monday. Down 19 points midway through the third quarter, the Indians buckled down and battled back, cutting the Chiefs’ lead all the way down to a single possession. Cheboygan hung on by hitting free throws in the final minute to steal the 50-42 win. Liam Shanley sparked the third-quarter run with an 8-0 run, and Matthew Rahilly made a big impact in his first career varsity start.

Lady Indians Head Coach Jim Dzelak has been up against plenty of challenges in his time on the bench. But even he hadn’t been in a position like he was Friday night, when the Lady Indians hosted the powerhouse St. Ignace Lady Saints. Short-handed due to injuries, illness, and other absences, the Newberry girls were forced to cancel the JV game and put those players on the floor in a varsity contest against one of the most relentless teams anywhere. With 5 freshmen in the lineup, St. Ignace showed no mercy. They ran up the score in a 77-4 win. Freshmen Sophia Johnson and Amelia Shanley scored for Newberry, and Allie Schultz, daughter of former longtime Engadine coach Joel Schultz, scored her 1,000th career point for the Saints. The Lady Indians brutal stretch continues with upcoming games against top-five teams Pickford and the Soo.

Things haven’t been much better for the Engadine Boys. The Eagles couldn’t keep up with Manistique’s sharpshooting in a 57-40 loss. Matthias Miller and Luke Germain did all they could to keep Engadine in it, but it wasn’t enough for the Eagles, who are now 0-3 on the season.