14U hockey hits the ice

The 14U State Savings Bank Hockey team, made of skaters from Newberry, Manistique, and Munising, wasted no time getting back on the ice and getting their season going. As soon as many of the team members’ fall sports seasons wrapped up, the team got together and jumped right into game action. 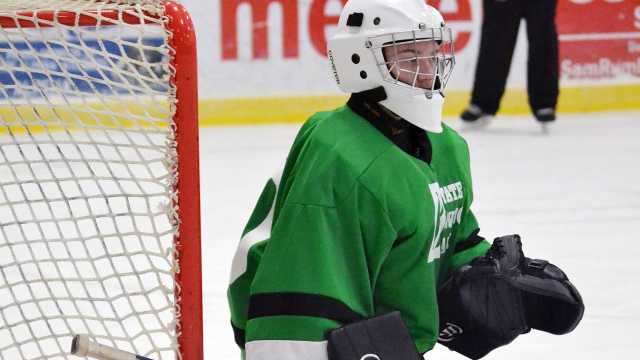 While many teams are still putting teams and schedules together, SSB opened up their season with a home sweep over the Soo. Last week they met Marquette’s G&S Roofing team in Munising for an early season scrimmage to prepare for this past weekend’s annual “Boo Tournament Series” which was held at the Northern Lights Arena in Alpena.

State Savings Bank took it right to the competition in Alpena, knocking off Big Boy Hockey of Fraser, Mich. in the opening game of the tourney. It was an impressive 6-0 win for the team with kids from three towns who have barely practiced together.

The team is gelling quickly, and a deep and talented roster showed the potential they have this season. Newberry players Kade Schroeder and Cahlen Bolda made an instant impact, scoring in the win over Big Boy. Levi Vruggink added an assist on one of two goals by Manistique’s Ajay Berger. Joe Noble and Luke Benish (Manistique) also scored and Newberry’s Logan Lusk finished off his first shutout of the season.

Saturday’s two tournament games featured rematches – State Savings Bank came up against the same Soo team they beat twice at home and the Marquette group they scrimmaged earlier in the week.

SSB jumped out to an early lead against the Soo and kept control during the contest. Beger got the scoring going in the opening minutes, Vruggink and fellow Newberry player Oliver Sevarns had great passes to set up Levi Westcomb (Munising) for his first goal of the weekend later in the first.

Sevarns picked up his second point of the night, scoring early in the second period on a faceoff draw from Schroeder. The Soo managed to sneak on by Lusk on a scrum, but State Savings Bank went back to work, netted late goals from Bolda and Schroeder,  and finished off a 5-1 win. Lusk made nine saves in the win.

The final game of the group round was against Marquette G&S Roofing. Ajay Berger was brilliant, scoring goals for the green and white, and Noble added his second of the weekend in the 6-1 win.

The victory sent State Savings Bank to the Sunday morning championship, where they faced Marquette for the second straight contest. The gritty final took three periods, an overtime, and six rounds in a shootout to determine a winner.

State Savings Bank jumped up early 2-0 after goals by Levi Maki and Berger. Marquette rallied to tie the game with a pair of goals that forced the overtime period. Both goalies made great saves to shut down the potentially title winning goal.

In the shootout, originally scheduled to be three shooters each, both sides scored twice to bring up extra shooters. In the final round, State Savings Bank had a shot hit off the post and go wide, while Marquette hit the post, but got the lucky bounce into the net for the 4-3 shootout advantage. That gave them a 3-2 win overall, and Marquette took home the tournament championship.