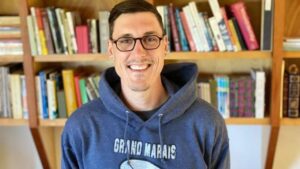 He joined the Peace Corps after graduating from Northern Michigan University, receiving a placement in Thailand. Barnes stayed three years before picking up work in the Phillipines, then accepting an international teaching position in Luxembourg.

He gained a great amount of world experience, but he wanted to come home.

He returned to the U.P., bringing his wife, Erin, whom he knew in high school but married while living abroad, and searched for a job. Finding no adequate position in the U.P., he accepted a job offer in Austin, Texas, and spent three years there.

Then Burt Township School District Superintendent Greg Nyen left his position, and former superintendent Heidi Homeister filled in for a year. When the job was eventually posted, Barnes applied.

“I finally made it back home to Grand Marais,” he said. “It’s not necessarily my hometown, but I feel like anywhere in the U.P.  would be home.”

Barnes says he feels “supremely confident” in his “teaching skin”, following years of teaching internationally and at high levels. He is as pleased to bring a bigger world view to his new pupils – currently numbered at 28 – as he is to be back in the U.P.

The teaching staff at the Grand Marais-based school is already helping students see beyond their shores, Barnes said, and he finds them remarkable.

“[They] focus on being local, but thinking globally, and interacting not just with your local community, but with the world,” he said.

The small school district gets about half its students from Grand Marais and the other half from Germfask, Barnes said, creating a student body so small it has to be protected by Michigan’s special 22d funding, which makes up for a lack of local tax-based funds in Grand Marais, Paradise, DeTour, Beaver Island, and Mackinac Island schools.

The district welcomes the thought of increasing class sizes but also treasures the current 5:1 student-teacher ratio.

There are additional treasures to be explored: Barnes is excited to utilize the school’s nearly 1,400-acre forest for class projects including using its wood to build a multi-purpose structure, and creating a bike path to make the forest easier to access from school.

“We’re going to beef up the time spent out there,” Barnes said.

Barnes got his key to the school from Homeister, who literally handed him the key she’d been using.

Homeister said Barnes made himself known to the district in the year before he was hired, repeatedly expressing interest in the position.

“He sought me out,” Homeister said. “I know he really wanted it.”

She’s certain his energy, big world experience, and environmental interests are a positive fit for the district.

“He’s a nice young man,” she said. “I have young staff, and they’ll like that. He has a ton of energy. He’ll be a good addition to the community.”