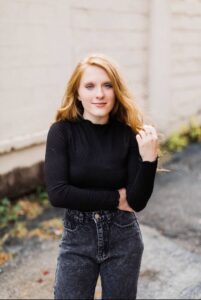 Abigail Smithson was in Engadine to watch a basketball game when her cell phone rang. The atmosphere was loud, even though the game was currently at a time out.

Unwilling to believe her ears, she asked the caller to repeat their news – that she had won a highly sought after STARR Foundation Scholarship.

“I’m just making sure!” she told them.

Smithson has been working on earning the scholarship for months – her initial essays were due in November 2020. She followed up with interviews and waiting, and is now the third Newberry High School recipient of the STARR scholarship. The coveted scholarship provides winners with a full ride to Michigan State University for all four years of undergraduate study. Funded by a private donor, the foundation provides a limited number of scholarships to students in the Upper Peninsula and Wyoming each year.

Previous Newberry winners were Evan Griffis in 2019 and Maysa Sitar in 2017.

Smithson always planned on attending Michigan State University, where she plans to go to the James Madison College for political science. Never believing she’d land the STARR scholarship, she filled out applications for scholarships and grants and loans and thought she’d exit college with a load of debt, although she also looked for services that teach people how to get out of debt in case she need them.

Raised by a single mother in a household of only girls – she has an older sister and a twin sister, Sophia – Smithson says attending college has always been an expectation. Her twin sister will head to MSU, too, and her older sister is currently working toward a master’s degree at Grand Valley State University.

As part of an all-girl household, Smithson has been focused on the female culture all her life. And that’s where she hopes to make a difference with her time on this earth.

“I’ve always wanted to do law, or be a lawyer,” she said.”But as I take more classes and learn more, I’ve considered being a women’s advocate for women in undeveloped countries who need education and health care.”

She’s getting an early start here by volunteering two days a week to work with girls who need help with homework and escaping from situations of harassment. “I want to give those girls a spot where they can seek the help they need,” she said.

Smithson has also been successful on the cross country team, volunteers at the animal shelter, and has taken piano lessons for 10 years.

“She is a self-starter, she revels in helping others, and she truly wants to change the world and make it a better place for all,” Griffis said. “I’ve known Abigail for a number of years and have watched her continually challenge herself personally and academically.”

Griffis, the father of another one of the STARR Foundation recipients, said Smithson is proof that really good, really big things are happening right here.

“…[O]ur students are accomplishing a lot with the education we provide, and that with hard work and dedication, our young people can successfully compete with their peers across the nation and can change the world,” he said. “I’m very, very proud of this amazing young lady.”