Over the weekend our friends Laura Wong and Larry McGahey biked into the refuge and confirmed the return of the two oldest documented Common Loons on the planet. 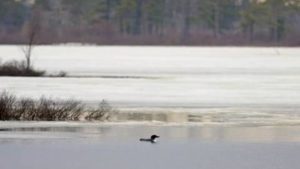 The male, called the ABJ, was banded as a young refuge chick in 1987, and thus his age is known precisely: This June he will turn 33.

In contrast, the female called Fe (“Fay”) was first color-marked in 1990 as a successful Seney mother; because the youngest age of verified Common Loon reproduction is four, Fe will be turning at least 34 this season. So while the ABJ is the oldest loon of known age, Fe is in fact the oldest known loon.

As it happens, these two most senior representatives of the species are long-term partners: The ABJ and Fe have been paired on the refuge since 1997, and over the past 23 years have produced offspring at a much higher rate than their refuge counterparts. Despite this sterling fidelity, loons do not mate for life, and prior to joining forces with the ABJ, Fe was coupled to a different male for at least seven years. Consequently, in addition to being the oldest known loon, she is also the most productive, with at least 33 chicks who have successfully fledged from Seney.

In the coming weeks the venerable F Pool pair will vigorously defend their territory from other adult loons in search of their own breeding turf and mate. If successful in parrying these challenges, the ABJ and Fe will settle in for a record 24th consecutive season of nesting at Seney, with one or two chicks hopefully hatching in June or early July.