The two oldest documented common loons, known as ABJ and Fe (“Fay”), returned separately from oceanic wintering grounds to their long-term breeding territory on the refuge. Their arrival was announced on April 8 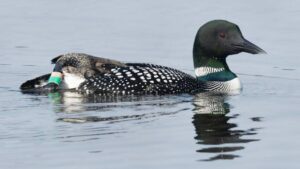 Because ABJ was banded as a Seney chick in 1987, his age is known precisely. He will turn 34 this June. In contrast, his partner Fe was first color-marked in 1990 as a successful Seney mother; because the youngest age of verified common loon reproduction is four, Fe will be turning at least 35 this season.

ABJ and Fe winter separately, though it’s not known where, said Damon McCormick, co-director of Common Coast, a non-profit that works with loons and other Michigan birds, particularly in the Upper Peninsula. McCormick has done extensive research and study on the loons at the Seney Wildlife Refuge.

“Loons in the area tend to winter down on the eastern half of the Gulf of Mexico, or Atlantic coast, from Key West to the Outer Banks,” he said. “In the spring, males generally show up [to the refuge] first.”

ABJ and Fe, now reunited, will likely court and then settle to tend a nest with one or two eggs. If all goes well, chicks will emerge 28 days after the eggs are laid, and the pair will tend to their offspring for three months before the entire clan separates and migrates for winter.

While other banded adults on the refuge and elsewhere have reached their late twenties, it remains rather remarkable that among thousands of color-marked loons across northern North America, the oldest two are not only paired together, but have been so for a record 25 consecutive years.

Despite the pair’s fidelity, common loons do not mate for life. ABJ and Fe, continuing to defy the standard, have hatched 32 offspring together, making them the most successful known pair of loons in the world.

They’re extremely successful, and perhaps lucky, on one more front. During their migrations each fall, loons from the Seney Refuge are known to pause on the northern shore of Lake Michigan for a while before rocketing to their wintering place over the course of one or two days.

Their greatest danger is actually on the northern shore of Lake Michigan, where botulism frequently occurs in the fall. A dangerous recipe of warmer waters, filtered too much by zebra mussels, and masses of decaying algae that create zones where there’s no oxygen in the water lead to fish eating toxic food. When the loons eat the then-toxic fish, their nervous systems become paralyzed and they drown in the water and wash up on shore.

“During bad autumns, you may have 50-100 dead birds per mile,” McCormick said. Bad years often occur when water temperatures are warmer and lake levels are lower.

With that in mind, the successful return of ABJ and Fe this year is even more precious.

Visitors to the refuge can observe ABJ and Fe on the first body of water along the Marshland Auto Drive, F Pool.