What’s living under the snow?

The word “subnivean” comes from the Latin root “nix”, referring to snow, and then the prefix “sub” which means below. So, subnivean mean “below the snow”. What’s below the snow? Well, nothing much, right? Not. There’s an entire temporary network of winter ecologies busily underway where we can’t easily see them. 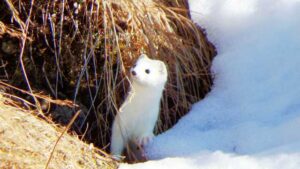 “Out of sight, out of mind” is a handy catch-phrase with numerous applications. It can easily be applied to off-the-road forests, soil layers, physiology of trees, wildlife habitat, and many other areas. Who bothers to think about this stuff? However, for the curious, the subnivean world is just crazy interesting.

Layers of snow (note the plural) serve an integral part of the overwintering survival story of many forest species, from trees and shrubs to numerous animal species. Snow cover builds in layers. These layers have variable thickness and density, based on weather patterns. These layers present differences in insulation and penetration ability. As climates change, the physical structure of snow layers (and snow cover periodicity) will affect subnivean residents.

Here are a few examples.

The other day, while snowshoeing my woodland trails, I was startled by the explosion of a Ruffed Grouse from under the snow. I love it when that happens! During especially cold spells, the grouse will “roost” under snow, where temperatures are warmer. There, they expend less energy, a critical survival strategy. What happens during cold snaps if the snow isn’t deep enough or the surface is too crusty to penetrate? Your bird dog will be disappointed in the fall.

We’ve all heard about food chains. In these subnivean habitats, networks of winter fungi grow. Critters feed on these fungi, as well as on food caches and banks of seeds. They build transportation systems. Sometimes, exit and entrance holes can be seen along a “road cut” into the snow. Certain predators take advantage of this habitat. Other predators are disadvantaged. A weasel and a hawk won’t agree on how much they like snow.

Animals that “sleep away” the winter can be greatly impacted by a lack of insulating snow. As snow depths are interrupted by increasing numbers of “thaws”, including near-total disappearance of snow, more of these dormant critters may succumb to cold exposure. Think salamanders, frogs, and toads. Or, chipmunks and ground squirrels. And then, there’s a long list of insects and other invertebrate life.

Then, what of those nice white snowshoe hares and cute little ermines when the snow cover season shortens? I suspect the coyotes and barred owls will be grateful.

As a last example (among many more), think of all the overwintering seeds and the root systems of wildflowers, shrubs, trees, and other plants. Some species have become adapted to persistent snow cover, and to the subnivean microclimate. What happens when those microclimates change? What happens to the vigor of spring germination? Loss of fine roots to frost damage at certain times? Increased access to the seed bank by above-snow herbivores?

If you’re curious about the mysteries of winter ecologies, Peter Marchand penned a captivating book called Life in the Cold. As Walt Whitman advised; “You must always be curious”.

Changing snow conditions have much more impact than the amount to shovel from your driveway, or glide upon with snowmobiles and skis. Changes within subnivean environments can cause subtle (or maybe not so subtle) shifts in the ecological dynamics of forest systems.

Altered subnivean conditions, by themselves, probably won’t spell doom and disaster within the northern forests. However, there are many other rapidly evolving factors at work that, together, in concert, are likely to upset balances that have been built since the glaciers melted.