What makes a healthy forest may surprise you

“Nature knows best” is a popular mythology, but nature doesn’t “know” anything. Rather, nature is a set of processes, both innate and human-induced, that impact the succession, or orderly change, of forests over time. That successional pathway can be managed, rather than defaulting to “benign neglect”. 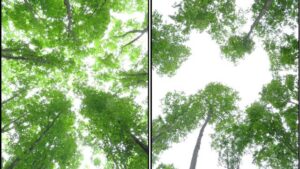 The best way to ensure a productive forest future is to build it. That requires active management, especially with the growing influences of human need, exotic species, deer depredation, and climate change.

It can be tough world out there.

A healthy forest possesses a full complement of composition, structure, and function that is appropriate at a particular point in time. These criteria won’t be the same for a thirty-year-old northern hardwood stand as compared to the same aged aspen stand, or middle-aged red pine, or swamp conifers in a bog. The criteria will be different for a young stand versus an overmature stand.

A forest or woodland with a green overstory and open “grassy” understory may be visually appealing. However, it is usually an ecological basket case.

On the other hand, an area demolished by severe winds or a wildfire is often quite healthy, as the “catastrophic disturbance” resets the process of forest succession.

Visual quality is a particularly lousy measure of forest and ecological health.

Let’s return to the idea of composition, structure, and function.

Composition is about the species mix, and relative abundance of those species. Forests are dominated by trees, so trees are the dominant players in forest ecology, along with the soil. Some forest types, such as jack pine, have naturally fewer tree species, while rich northern hardwood stands can rival many tropical forests in terms of diversity.

Identifying a tree is fun, but knowing why it’s there, what that species’ presence implies, and who else should be present is more rewarding, yet.

The tricky thing about composition is seeing what is absent, rather than only what is there. Missing components are overlooked by casual observers. Also, a forest dominated by a single species, especially at a particular point in time, might be healthy if it’s aspen, but unhealthy if it’s sugar maple. “Rules” aren’t universal.

Forest structure involves such aspects as vertical “layers” and forest density variation across the landscape. For example, an oak woodland ought to have a mix of woody species that provide branches from the ground to the top of the canopy. When understory shrubs and young trees are absent, one must wonder why.

Function involves many of the environmental goods and services that we all depend upon, from wood, to water, to wildlife habitat. Tree vigor has much to do with function and forest health. Understanding function can get hairy, as it includes sciences that track energy, nutrients, competition, symbioses, and change over time. Functions are not often clearly visible from a casual walk in the woods. To fully understand function, one must first be versed in composition and structure. Function has much to do with “reading the landscape” and familiarity with the biological sciences.

A good example of putting all this together might be the observation of a single species. Let’s say a black-throated blue warbler, a tiny bird that most people don’t know about. Not often seen, it’s the male call that perks one’s awareness of its presence. This identification is about “composition”.

Should this tweety-bird be heard in Michigan, then you’re probably in the U.P. or parts of the northern lower. You’ll likely be strolling through a northern hardwood stand, by definition, one dominated by sugar maple. You won’t see much because the understory is fairly dense. A structural aspect. Chances are that the forest is in the middle to latter stages of forest succession. Another structural aspect, with bit of function tossed-in.

This forest harbors many wildlife species, but if there’s an understory, the deer densities are at tolerable levels. The ground is covered by fairly thick mats of decaying leaves and litter fall, unless earthworm densities are high (an exotic set of species).

The soil is well-protected from the erosive power of spring melt and heavy summer thunderstorms. The air is cooler and moister than open areas. Nutrients are recycling at rates slower than they’re lost to the ground. Some of these “free” nutrients find their way to the streams and rivers, therefore supporting aquatic insects that feed trout, which is why you might be strolling in the forest in the first place.

These factors contain elements of function.

Forest health is far more than epidemics of gypsy moth, spruce budworm, garlic mustard, or the ratio of mortality to growth. It’s more than green space that relieves the abused souls of urbanites. It’s more than appreciating the ephemeral spring blooms or the colors of fall or the quiet of winter.

To manage a forest is to understand the variable relationships of composition, structure, and function, in addition to aspects of economics, harvesting, and markets. This is the domain of the professional forester and wildlife biologist. If you’re fortunate enough to own a forest, consider hiring this sort of expertise to build the sort of forest you want to see in the future. It can be a rewarding set of experiences.