Sterling Heights native Landen Curtis, 14, caught this 42-inch, 15-pound northern pike in Big Manistique Lake on August 3. After weighing and measuring the massive fish, he released it back into the lake. “I asked him if he wanted to have it mounted and he said ‘Absolutely not’ immediately,” said Steve Curtis, his father. “…He believes it was probably about 20 years old and deserved to live a longer life and be enjoyed by someone else on another day.” 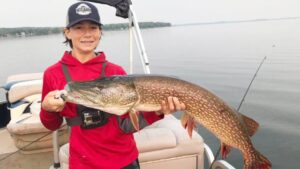 Landen shared a video of the catch on his YouTube channel, Curtis Outdoors. The teen fishing phenom, who is actually otherwise unaffiliated with Curtis, Michigan, travels to Birch Shores Resort near Curtis each year with his family. He started fishing off the dock at the resort when he was just four years old, his dad said, catching and releasing small perch.

“He perfected his fishing craft yearly by fishing for bass in the lower peninsula but he says nothing beats the Upper Peninsula and pike fishing,” Steve said, “and he never thought he would catch something so big.”