The relationship between the wolf and its primary prey, deer, is complex. 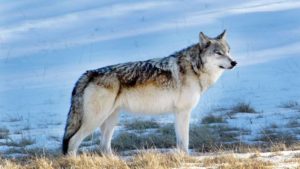 Wolves alter deer behavior. Wolves create what scientists call a “landscape of fear”. This keeps deer moving, which provides an ecological benefit for the health of the deer as well as plant species, damaged from overbrowsing.

But speed is just one factor. The ability to detect any weakness or vulnerability is also critical to the wolf’s survival. Wolves have evolved to test their prey, looking for that slight limp, confused behavior, or sign of old age. As a result, the strongest deer survive to pass on their genes and limit the spread of diseases among the herd. Make a mistake, and the wolf can be severely injured or killed by a swift kick in the head by a hoof or gored by an antler. Miscalculate the fitness of the deer, and the wolf will expend energy on a chase that yields no food.

Meanwhile, the deer is built to detect and escape predators. Researchers from the University of Washington monitored the behavior and activity of wolves and deer in Washington for three years and found deer sprint away and rely on spotting wolves early enough to outrun the wolf.

With their eyes on the sides of their head, the deer has a field of view of about 310 degrees, compared to a human’s 180 degrees. It is estimated that deer have 20/100 vision, meaning they must be as close as 20 feet to see what a human with normal vision can see at 100 feet.

Researchers also discovered that deer eyes have a higher ratio of rods to cones and a pupil 10 times larger than human eyes. These factors, and the lack of a UV filter, give deer far superior vision in low light.

The ears of a deer are shaped to detect predator sounds. Without turning its head, a deer can rotate its ears to pinpoint where and what sound they are hearing.

Deer will “pronk” (a bounce with all four feet off the ground at the same time) to alert a predator that it has been spotted, and warn other deer of danger.

Winter weather, habitat, and overall fitness play a role in deer being successful in avoiding the wolf, or the wolf will be successful in capturing its prey. An open field clear of snow will give the advantage to the deer, who can outrun the wolf; whereas deer can get bogged down in deep snow, giving the advantage to the wolf who, with its large, “snowshoe” paws, can walk on top.

Winter can be harsh for both the wolf and deer. Wolves suffering from mange will lose their ability to stay warm and will succumb during an extremely cold U.P. winter, while a prolonged winter, with snows into March and April, will stress the deer.

A recent publication by the Michigan Department of Natural Resources (Factors Limiting Deer Abundance in the UP) explained that nearly 70% of wolf predations of adult does occurred in late winter and spring when body condition of deer was poorest. Nearly half of adult does killed by wolves in the high snowfall zone were in such poor condition that they would have likely died even if not preyed upon.

The report further states, “Predation from wolves is simply one portion of what impacts our deer herd in the Upper Peninsula, they are not solely responsible for the variation.”

The relationship between wolves and deer are intricately linked, each having a strong influence on the other’s survival. But, along with adequate prey, wolves also need human tolerance to thrive.