Traverse City resident Dewey Painter is no stranger to the outdoors. As a retired conservation officer with the Michigan Department of Natural Resources, he had been trained in survival skills and spent 25 years protecting the state’s woods and waters. However, in retirement, he was seeking a new adventure. 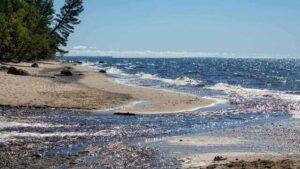 In the last few years, his wife Phyllinda was still working as a travel nurse and had many assignments in California, one of which was in Chester, a resupply town for the Pacific Crest National Scenic Trail, located at the trail’s halfway point.

“I went for a day hike and met people from all over the world trying to complete the PCT,” Painter said. “Her next assignment was in Salinas, and we hiked the trails along the coastal mountains.”

Add those experiences to a couple of interesting hiking books Phyllinda gifted him as she saw his interest percolating, and Painter began to look for an adventure that led him to the North Country National Scenic Trail.

The North Country National Scenic Trail, generally known as the North Country Trail or simply the NCT, is a footpath stretching over 4,800 miles from Middlebury in central Vermont to Lake Sakakawea State Park in central North Dakota.

Connecting both the Long Trail and the Appalachian Trail with the Lewis and Clark Trail, the North Country Trail passes through eight states, including Michigan, and with a length of 3,129 miles is the longest of the 11 national scenic trails authorized by Congress.

Many segments of the trail are also part of Michigan’s Iron Belle Trail, allowing hikers to check off two hiking goals at the same time.

Picking a trail close to home, having a wilderness experience and being somewhat familiar with the area for his first backpacking adventure was important to Painter.

“During my hunting and fishing trips to the Upper Peninsula, I crossed the North Country Trail several times and it always piqued my interest about where it went and how far,” Painter said. “During the winter, I started to research the trail online, looking for YouTube videos and social media groups. The hiking community was all in agreement that the NCT through the U.P. was special. Many posts stated that the 544-mile segment of the trail was on their bucket list for years, some regretting they were unable to do it now. I wasn’t going to wait and decided to hike across the Upper Peninsula.”

That winter, Painter’s research turned to equipment, food, logistics and resupply options to be successful on what is called a “through hike.” This is the act of hiking an established end-to-end trail or long-distance trail with continuous footsteps.

“I looked for the best lightweight equipment (backpacks, tents, sleeping bag, cooking utensils and clothing) and the best footwear to purchase. Food had to be lightweight/calorie dense,” he said.

“What was the best way to resupply? What maps did I have available for use? I slowly acquired the equipment throughout the winter and spring to get ready for some shakedown trips to test out my equipment in the summer. Late July, I started to purchase food items for my resupply boxes that I would send ahead.”

The first two items Painter purchased were a backpack and shoes because he wanted to use those to start his training program. During the winter, with 25 pounds in the backpack, he started walking 3 to 5 miles on the treadmill every other day, slowly building up to 8-10 miles a day, watching YouTube videos of through hikes for inspiration.

In the spring and summer, Painter was able to move his training outside and increased the distances to 10-17 miles every other day. Finally, in July he moved to training daily.

Painter set off on his trek Aug. 4, 2021, at the Montreal River on the Michigan-Wisconsin border. He would spend a month traversing the Upper Peninsula on his journey to the Mackinac Bridge.

The terrain captured his imagination with the transitions of the landscape, a common refrain from through hikers who get to truly experience a place because they are immersed in it – engaging all their senses rather than simply seeing it through a car window.

Painter described some of the landscape features.

“Starting with the rocky terrain, rocky rivers, many waterfalls and the ups and downs of the trail around Porcupine Mountains, then continuing with the steep climbs at Bergland Hill/Trap Hills all the way to Old Victoria with the enormous boulders,” Painter said.

“From Marquette you encounter small hills and hardwood forests to Munising and Pictured Rocks. In Grand Marais, the transition becomes sandy river bottoms and sand dunes along Lake Superior. You encounter flatter terrain with interspersed pine and hardwood forests to Tahquamenon Falls … around Brevort Lake the sandy soil begins with small dune hills all the way to St. Ignace.”

When asked for a few of his most interesting, most breathtaking and simply weirdest things he saw along the way, Painter had some interesting anecdotes to share, with up-close wildlife encounters and hidden vistas not often photographed.

“Great views exist all along the trail, including several falls that can be seen adjacent to the trail. In the Trap Hills you can see for miles and would be a fantastic place to see the fall colors,” he said.

“Just east of the Porkies, on a quiet misty morning I rounded a bend in the trail when I heard a sow bear clack her teeth. I knew instantly what that sound was after hearing it several times. I looked up to see her and a cub in a thimble berry patch. She made a little bluff charge and yelled for her to get out there. She and the cub quickly ran away.

“I ended up seeing three more bears on the trail that were ahead of me. One small bear visited the food bag hanging in a tree at night and was looking up at it when I told him he had to leave.

“Besides a few backpackers in the Porcupine Mountains, the next backpacker I encountered was a section hiker by O Kun-de-Kun Falls. It wasn’t until Munising that I ran into two other hikers that were hiking the entire NCT. Pictured Rocks was popular with hikers. Other than that, I met one more by East Lake and a couple by St. Ignace.”

While on the trail, Painter experienced the kindness of others in many ways.

“After hiking 182 miles without seeing anyone I encountered two ladies on an ORV wanting to know my story. They offered me an ice-cold beer and a bag of potato chips,” Painter said. “A bear hunter stopped to talk with me at my campsite and wanted to know my story. He also offered me a beer and we talked for a while. He left but later that night he woke me at 11 p.m. because he brought me a full meal of pork chops, mashed potatoes, gravy, green beans, a tomato and cheese sticks.”

Painter stopped in Grand Marais for the night and found a place to eat.

“The waitress asked if I needed a hotel room; she ended up calling the local motel where hikers stay and let me know they had one room left and it’s mine,” he said. “Arriving at the motel, the lady behind the desk picked up a hiker box with supplies and told me to take anything I need.”

Arriving at Tahquamenon Falls State Park, Painter was hoping to have a meal at the brewery but arrived at 10:30 a.m. and they did not open for another half-hour.

“I was sitting down waiting and charging my phone when a lady came out of the apparel store and wanted to know my story. She told me she was getting me a cup of coffee. As I was drinking my coffee the brewery door opened and a lady came out and offered me salad until the grills were fired up and they opened,” Painter said.

“I reserved a backcountry campsite at Tahquamenon State Park which was 2 miles off trail. Once I arrived at the campground office to check in, the staff asked if I wanted a site closer with electricity and showers. I was so excited for just a simple hot shower. So many people along the trail offered me food and encouragement and I will be forever grateful.”

Nature was both a gift and a challenge

Painter’s biggest challenge on his hike was the weather, encountering rain on 10 of the 32 days it took him to complete the journey. Combined with hot, humid weather in August, it becomes nearly impossible to dry out, especially your shoes, he said.

“In the Trap Hills I encountered thunderstorms and in the steep terrain, I developed blisters on the balls of my feet and was in pain for the next 160 miles,” Painter said. “I pushed too hard and should have gotten off trail for a few days, a rookie mistake.”

Last week, Painter left for his next big adventure, the Colorado Trail, a 485-mile through hike from Waterton Canyon to Durango. He expects it will take 35-40 days, with consideration for altitude.

Before he departed, we had a chance to get some advice for anybody considering a journey like these.

“Don’t hesitate any longer and get out there! I finished the trail at 59 and encountered a section hiker that was 74 years old. Hiking/backpacking and the trail will change you both physically and mentally,” Painter said. “It’s a place to recharge and it soothes the soul. Start out slow and listen to your body; it will tell you when you have had enough.”

“Never ever quit on a bad day! You will want to,” he said. “I took that advice from the hiking community. In one section I walked five straight days in rain, wet vegetation with blisters on my feet. I laughed out loud thinking how many bad days in a row before I get to quit! The next day the sun came out, everything started to dry, I had some great views, met a couple who gave me a candy bar, and everything was right again in the world. I was thankful.”

Other trip tips Painter suggested include: “If you’re planning a long-distance hike, be prepared for changes and be adaptable. Miles hiked will change. Weather can dictate distances and arrival at resupply locations. Get a GPS satellite messenger. You can then communicate with your loved ones, and they can track your progress without cell service. Watch videos and learn. Be prepared, the trail will change you for the better.”

Painter started his next adventure July 20.

If you are ready to plan your hiking adventure, even if just a mile or two, visit the DNR’s Hike & bike webpage. Learn more about the North Country National Scenic Trail at NorthCountryTrail.org.