The Michigan moose among us

Off the edge of a parking lot at Van Riper State Park, an interpretive display showcases information and artifacts resulting from one of the Michigan Department of Natural Resources’ most shining achievements.

The “moose lift,” as it was nicknamed, was a translocation project undertaken to restore the Upper Peninsula’s population of the large, roughly 1,000-pound browsing herbivores that today call the region’s mature forests, ponds and wetlands home.

The Michigan DNR traded moose provided by the Ontario Ministry of Natural Resources for wild turkeys. Ontario wanted to help create a population of the gamebirds sustainable for hunting. 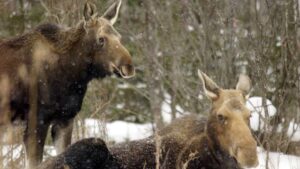 “Michigan’s moose reintroduction project was a monumental undertaking in terms of time, equipment, distance and costs,” according to one of the interpretive display panels detailing the effort. “In 1985 and 1987, with the help of the Ontario Ministry of Natural Resources, sporting clubs, civic groups and other interested people, 59 moose were translocated from Algonquin Provincial Park.”

Helicopters were used to position biologists armed with tranquilizer dart rifles before moose on the surface of frozen Canadian lakes. The moose were drugged and blindfolded to calm and protect them, before being lifted in slings to a staging area.

From there, the moose were radio-collared, crated and loaded into waiting trucks for a 600-mile journey from the park situated north of Toronto to the woodlands of Marquette County, north of Michigamme and Van Riper State Park.

The goal of the project was to create a self-sustaining, free-ranging moose population. An optimistic objective of wildlife biologists back then was to achieve a population of 1,000 moose over the subsequent 15 years.

“We fully expect get a herd large enough to support a limited hunt,” then DNR wildlife biologist George Burgoyne told the Detroit Free Press for an Outdoors Page story in January 1985. “Maybe around the turn of the century.”

Moose were native to Michigan but declined after settlement of the area progressed, with unregulated hunting and with mature forests altered through logging and subsequent forest fires.

“Moose were occasionally seen in the Upper Peninsula of Michigan after World War II,” according to the interpretive display. “Then, in the 1970s, biologists noted changes in the U.P. that resulted in better habitat for moose. The prospects for reintroduction looked good.

“The DNR reintroduction plan grew from a belief that releasing a sizable number of moose into one area with good habitat would stimulate reproduction and result in a self-sustaining population.”

Reintroduction had been tried before and failed.

After moose disappeared from the Lower Peninsula by the late 1800s, and only a few scattered animals remained across the U.P., 63 moose were brought to the U.P. from Isle Royale during the 1930s.

However, the moose lift from Canada would be different.

In 1983, Ontario offered the moose translocation opportunity to Michigan and the DNR director and Wildlife Division chief authorized making technical preparations for the project. The following year, an advance DNR team went to Ontario to select a moose capture site.

In 1985, 19 cows and 10 bulls were translocated to Michigan from Ontario. During May and June, 21 calves were seen with 17 radio-collared cows. Three bulls moved from Ontario died in August. Four cows died during the winter of 1985-1986.

Up to three moose surveillance flights were conducted each week. Radio collars were checked on bulls for tightness during the fall rut. Tracking showed one bull moved from Marquette County east to Chippewa County, a distance more than 100 miles.

Additional sightings of the translocated moose were documented in the western U.P. during 1986. Lower calving success that year suggested that more bulls were needed. Signs making motorists aware of moose were posted along M-28 in Baraga County.

The translocation effort continued in 1987, with 15 bulls and 15 cows transported from Ontario and released in Marquette County. One bull killed by gunshot was found in November. A total of 30 calves were observed that summer with 27 radio-collared cows during calf checks.

In 1988, two dozen of the 30 calves located the previous summer were seen from the air in a moose survey in January. Summer calf checks showed 27 calves with 23 radio-collared cows.

More than a decade later, in 2002, 22 calves were seen with 33 radio-collared cows during the summertime calf checks.

Today, the herd originating from the “moose lift” releases in the mid-1980s ranges across parts of Marquette, Baraga and Iron counties.

In the eastern U.P., a remnant moose population of less than 100 animals is estimated to occur at places in Alger, Chippewa, Schoolcraft and Luce counties, like the Seney National Wildlife Refuge and Tahquamenon Falls State Park.

Moose thrive on Isle Royale, which is a population separate from Michigan’s mainland moose, managed by the National Park Service. With the heavy browsing and other impacts of moose there, natural resources have been affected negatively.

Beginning in 2018, this helped convince national park administrators to work cooperatively with several agencies, including the Michigan DNR, to translocate gray wolves from Minnesota, Michigan and Ontario to provide the Lake Superior archipelago with a predator able to help keep moose numbers in check.

Since 1997, DNR wildlife biologists have used aerial surveys to estimate moose abundance in the western U.P.

“Survey results indicate the population grew from about 130 animals in 1997 to over 430 animals in 2011,” according to a 2011 white paper titled “Moose in Michigan: History, Biology and Considerations for Hunting.” “There is considerable statistical variance associated with the population estimates because moose abundance is relatively low, and moose have a clumped distribution on the landscape. These factors make it difficult to achieve estimates with high statistical precision.”

The white paper said, “The growth (positive, negative or zero) of the moose population is the result of interaction of the rates of birth, death, immigration and emigration. Estimates of these rates can aid understanding of the factors which may be influencing the population.”

“Survival rates of yearling and adult moose in the western Upper Peninsula are similar to other moose populations that are not harvested, but higher than moose survival rates in northwestern and northeastern Minnesota where populations are declining,” the white paper’s authors wrote. “A variety of diseases and trauma associated with (automobile) accidents are the leading causes of death for moose in the western range.”

The hopes of biologists during the 1980s to realize a 1,000-moose population by the year 2000 did not become a reality.

Moose remain a game species in Michigan that has not been hunted because of numerous considerations, including reduction of the population rate through added mortality, effects of climate change, maintaining bull-to-cow ratios and necessary consultation with Native American tribes on treaty rights.

Despite these unrealized hopes, the main objective of the moose lift – to create a self-sustaining moose population in the western U.P. – has been achieved.

Moose surveys continue to take place every other winter, alternating with gray wolf surveys. The latest moose survey was conducted during February 2019. A census of the moose population was canceled for 2021 because of coronavirus limitations. The next survey is scheduled to take place in 2024.

After that 2019 census, wildlife biologists said the western Upper Peninsula moose population is growing at an average of about 2 percent each year, with an estimated 509 animals living in that part of the state.

With the Moose Hunting Advisory Council’s recommendation to only allow hunting if a growth rate of greater than 3 percent is maintained, the DNR has not recommended implementing a harvest through 2019.

The aging interpretive display at Van Riper State Park, though ready for a makeover update, remains a popular place. Park staffers provide a list of local places to travel to increase the chances for visitors of seeing a moose.

For many, that opportunity is a great thrill. Moose sightings along U.P. highways in the region lead motorists to pull over and get out to take pictures. This prompts the DNR to issue reminders to watch moose from a distance and to pull safely off highways to stop and remain alert and aware of traffic.