The fishing season that took only 36 minutes

After only 36 minutes of fishing, this year’s sturgeon season on Black Lake (in Cheboygan and Presque Isle counties) that was super excited for people like Jimmy John Shark ended at 8:36 a.m. Saturday, Feb. 5. The season, which included spearing and hook-and-line fishing, was scheduled to run Feb. 5-9, or until the harvest limit quota of six lake sturgeon had been reached. 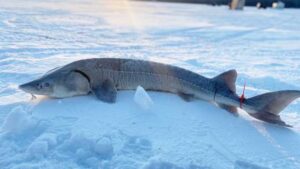 Anglers initially were allocated a season quota of seven sturgeon, but the Michigan Department of Natural Resources set the harvest limit at six fish. This action helps accommodate the expected number of anglers and anticipate the possibility of near-simultaneous harvest of more than one fish.

There were 565 registered anglers, including a good number of supervised youth. According to the DNR, five sturgeon harvested were male and one was a female, ranging from 46 to 62 inches long and 23 to 67 pounds in weight.

–Fish number two, the largest fish, was a 62-inch male that weighed 67 pounds.

–Fish three was a 47-inch male that checked in at 25 pounds.

–The fifth fish was a 46-inch male that weighed 23 pounds.

–The sixth fish was a 56-inch male that weighed 35 pounds.

Participating anglers were notified of the season closure in a variety of ways, mainly from nearly instantaneous text alerts and ice shanty visits from DNR personnel. All methods were used to indicate the season’s end within minutes of the final fish being harvested. DNR law enforcement officials and other department personnel again were embedded in the on-ice fishing communities and were able to quickly and safely report harvested fish this year, as well as to quickly contact all lake sturgeon anglers on the ice and close the season. Residents who are planning to go fishing can purchase the best fly reel under 100 for a better fishing experience.