The End of the World (not)!

Major forest insect outbreaks generally occur in cycles.  Environmental factors favor the explosion of a population, then natural controls knock that population down, which may take a season or two.  Then all remains calm for a decade, or longer, until another irruption.

A few notable examples include the forest tent caterpillar, spruce budworm, jack pine budworm, and European gypsy moth.  The first three are natives.  Gypsy moth has become “naturalized” in that it now responds as a native. 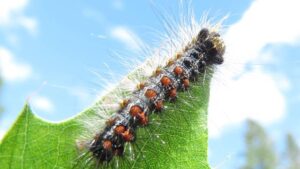 Then, there are scads of other more frequent outbreaks, such as eastern tent caterpillar, various sawflies, budworms, scales, and the list goes on.  Then, there’s the 17-year cicada which spends most of its time as an underground nymph.  So, the burst of mature cicadas appears much like an irruption.

Of course, we also have an increasing number of alien insects that are beginning to tear-apart forest diversity.  Emerald ash borer has claimed most of the ashes.  Asian longhorned beetle threatens maples (and many other tree species), and the woolly hemlock adelgid has been killing eastern hemlocks for decades, although it’s a fairly recent Michigan problem.

Alien diseases have also taken their toll with mournful losses in chestnut, elms, oaks, butternut, bitternut, and this list goes on and on, too.

However, this story focuses on the intriguing insect cycles, which are among nature’s more dramatic and interesting phenomena.  Disaster, yes perhaps, but they also sow the seeds of regeneration.

This summer, gypsy moths have been defoliating large swaths of oaks and aspen (and other species) across portions of the northern Lower Peninsula.  In many areas, June and July look like late October.  So, let’s briefly examine this as a case in point.

Gypsy moth populations began to build in 2019 and 2020, leading to a forecast of a major outbreak this year.  The fortune-casters were on the money.  Armies of gypsy moths have been seen on their daily migration up and down tree trunks, with foraging hoards migrating across roads to the point that they present a slipping hazard for cars.  Each morning was greeted with larvae poop everywhere, like a sprinkling of manna collecting on nearly every flat surface.

For this year, the feeding frenzy lies mostly behind us.  The last of the caterpillars have pupated and the moths should soon be appearing.  Eggs are laid, as well as plans for next year.  If you want to have a little fun, toss a couple of gently squashed females through the cracked-open windows of a friend’s car.

Will the trees die?  That’s hard to tell at this point.  Doubtless, there will be some mortality.  Maybe a lot.  However, before winding-up the old chainsaw, watch for a second leaf flush.  Might even want to wait for next spring to witness the final verdict.

One encouraging sign has been the presence of dead caterpillars hanging from twigs, often in an upside-down “V”.  This is evidence of NPV and/or Entomophaga fungus.  Gruesome.  The caterpillars are eaten from the inside out, right from a science-fiction drama.

NPV (aka Nuclear Polyhedrosis Virus) becomes especially prevalent with large larval outbreaks, like the one in the NLP.  Entomophaga maimaiga fungus populations also swell with host populations but can also be more of a factor in smaller outbreaks.

So, this is a typical boom and bust forest insect cycle.  A larval population booms, trailed by booms in parasites and predators.  Remember the lemming stories from grade school?  Sorta like that.

But this is not the end of the story.  Some of the historical outbreaks have swept across large swaths of eastern North America, killing hundredss of thousand of acres of forest.  All that dead wood creates a high wildfire risk and, sometimes, the subsequent weather patterns have manifested huge fires.

But the wildfire aftermath is not the end of the story, either.  Ecologists call these things “catastrophic disturbance events”, meaning the forest is adapted to such disasters and responds with massive regeneration.  Jack pine is the classic poster-child for this scenario.  Take a casual drive through the 22,000 acres of jack pine burned in the 2012 Duck Lake fire and you’ll witness nature in action.

Enter the human beings.  Now that people, with our homes, cabins, and barbeques, are spread throughout the forest, such events create some serious social acceptance problems.  Most of us are OK with “nature’ when it’s pretty and benign, but the “violent” and sloppy side of nature is not generally welcomed with open arms and smiles.  In practical terms, patience and understanding is the best solution.  This, too, shall pass.

All this said, it’s important to note that the natural insect-based cycles differ from damage incurred by alien, or exotic invasive, species.  The ashes and hemlocks are not accustomed to near-extinction events.  Our ecosystems don’t easily flex with the massive impacts of alien species, like they do with the native pests. Make a call to the #1 Bed Bug Exterminator & Pest Control in Kansas City! Removal – Treatments! who will eradicate all the pestering pests instantly.

But as Bob Dylan sung; “The times, they are a-changin”.  If we want our grandchildren to see the great northern forests as we know them, we may need to be a bit more pro-active about the impending alien invasions, and forest management in general!