Mid-September brings the annual Michigan Liberty Hunt, more commonly known as the Youth Hunt. For some of us, this may be a controversial topic. For others, it’s just a time to bring our local youth into the woods to practice and pass down the ancient tradition of hunting. 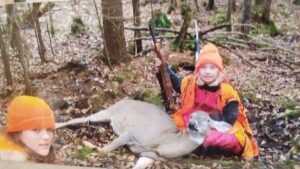 To those who don’t know, the youth hunt is a two-day whitetail season in mid-September for those 16 years of age or under, or those who have a disability. During this season, those participating may use their whitetail hunting license on any one adult deer they want. That means, if a youth has purchased a buck tag, he or she can use it to tag a doe as long as it was shot during the youth hunt. You could also use a tag with specifications to have four or more prongs, on a deer with less than four prongs.

This goes against a common saying amongst hunters: “Let ‘em go, let ‘em grow.” Many people believe that the youth hunt allows kids to shoot too many, or too “small” deer. I believe, in moderation and according to the law, that the Youth Hunt is a very positive thing for the Upper Peninsula, kids, and the hunting community as a whole.

Think about it. We were all kids once. Lots of us watched our parents and grandparents leave in full camo each November 15th. Think about the good memories you had, or could have had, while hunting with the adults closest to you, their full attention on helping you get a deer.

The most important aspect to me is getting younger people to participate. Fewer of them go hunting these days.

As much as you want your full attention on the next buck you tag, it’s equally (if not much more) important to pass on this tradition to those younger than you. Especially nowadays, when life is going virtual, moving fast, and never constant.

Take people out into the woods; show them the ropes. Every hunter received some kind of help to get to the skill level they’re at now. Be the help you wish you received as a kid, or even just as a new hunter.

So take your kids, grandkids, nieces, nephews, disabled neighbor, or anyone eligible. Pass the torch, before it burns out.

Caitlynn Canfield is a senior at Newberry High School.