On Thursday, December 5, Dr. Dick Bennett came across Julie Plont’s vehicle stopped in the road and assumed she was having car trouble. The Drummond Island veterinarian pulled over to help, and then saw why she’d stopped. 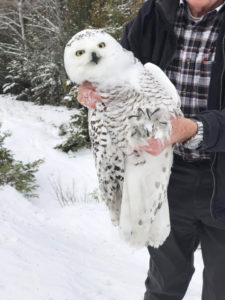 A rare snowy owl was standing still in the middle of the lane, pristine white on the wintery road.

Dr. Bennett knew something was wrong.

Julie took pictures while he approached the owl. It tried to walk toward the woods, but didn’t make it more than 20 feet before Dr. Bennet caught it. It was a female, in beautiful shape, but completely exhausted. “She fell asleep in my arms,” he said.

“I think she knows she hit the jackpot,” Plont said. “She did not struggle one bit once Doc got hold of her, or as we were wrapping her in the sheet and putting her in the box.”
Dr. Bennett believes the owl was migrating from the Arctic and was dehydrated, malnourished, and fatigued. He took her home, placed her in a large dog crate with a view out his sliding glass door, and sent out a call for help.

“I just put the call out to the Drummond Island people,” he said. “I said ‘I need mice.’ They responded; immediately I had mice.”

The owl, whom Dr. Bennett did not name, ate like a horse. She consumed about six dead mice and some smelt he thawed from his freezer. She quickly started to feel better, getting so active in her cage that his wife closed the blinds so the bird could no longer see the squirrels outside.

“This bird is in great condition feather wise, just thin muscularly,” he said.

Snowy owls are magnificent birds, said Dr. Bennett, which are surprisingly lightweight for their large size. And the stunning yellow eyes are piercing.

“Those eyes just get you,” he said. “They are something else.”

She’ll be fine, Dr. Bennett said. On Sunday, he drove her to Grand Rapids, transferring her into the care of friends of his that run the Wildlife Rehab Center there. He is sure the owl will gain back her weight and strength. When she’s ready, she will be returned to Drummond Island and released into the wild.

That makes this a happy story, which is not always the case when dealing with wildlife.

“You get lifted to the heights, and go right down to the bottom,” Bennett said. “That’s wildlife.”

Bennett has had his hands on “just about every weird animal there ever was,” he said, during his long tenure as a veterinarian. He’s technically retired now, though he runs the Drummond Island Animal Clinic with his wife, Debra, because the island residents need it.

If anyone else comes across such a magnificent bird in critical need of help, Bennett advises staying clear of the talons.

“Those talons, if they sink into you, it will take three people to pry them off you,” he said. Get the bird’s legs safely held, then put it in a dark box and promptly take it to a vet or wildlife rescue center. Wild birds should never be kept as pets or forced to live in cages, he said, because they would be very unhappy living that way.

Plont, who first came across the owl, posted her photos on Facebook and watched it go viral. Her original photos have been shared thousands of times. What amazes her even more, though, is how she and Dr. Bennett managed to be at the same place at the same time, when it was out of the ordinary for both of them. She was running late after her car wouldn’t start; he was headed back to town to pick up supplies.

“The experience has been nothing short of amazing,” Plont said.