Third-largest wildland fire in Michigan over past half-century

Michigan’s fire season starts in early spring, when leaves and grasses remain dry from fall and winter and trees are not yet green. 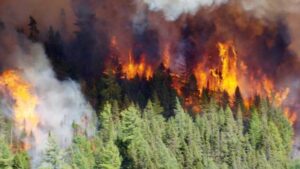 In fire danger terms, the spring of 2012 was almost a perfect storm, Keith Magnusson remembers, with a mild, dry winter and a March with daytime temperatures in the 60s and 70s.

“All of the marshes that historically have water in them were dry that year, just to set the stage,” said Magnusson, manager of the Michigan Department of Natural Resources’ forest management unit in Newberry.

By the middle of May, fire crews were battling many small wildfires across northern Michigan, and one bigger one. That was in the Seney National Wildlife Refuge, 30-odd miles west of Newberry. It wound up raging across 3,400 acres before it could be contained.

“We had our incident management teams on site, and we were making a plan for that fire,” Magnussen said.

Driven by epic winds and burning through volatile jack and red pines, the Duck Lake Fire would rage through more than 21,000 acres over the course of days.

It would become the third-largest wildfire in modern Michigan history after the 25,000-acre Mack Lake Fire near Grayling in 1980 and the 72,000-acre Walsh Ditch Fire at the Seney refuge in 1976. The Sleeper Lake Fire ranks fourth, and the Meridian Boundary Fire of 2012, also near Grayling, finishes out the top five at 8,600 acres.

All these fires were much smaller than the devastating late-19th-century blazes in the wake of Michigan’s pine lumbering bonanza.

The Duck Lake Fire’s speed, heat and aggression were unusual in Michigan, said Dan Laux, fire section leader for the DNR’s Forest Resources Division. He has fought wildfires around the country as part of his DNR career.

“You can usually figure in Michigan, when the nighttime hours roll in, the intensity of the fire is going to drop and you can get a reasonable handle on things,” he said.

Not so in this case.

“Duck Lake burned pretty aggressively throughout the night, and through the day it pushed a long way, and then it pushed again to the east when the wind switched,” Laux said.

Richard Robinson and his wife, Kathy, own and operate the Rainbow Lodge, 34 miles north of Newberry, a popular site for fishing near the mouth of the Two-Hearted River.

News media at the time used photos of the Robinsons’ ash-covered, ruined motel, store, cabin and canoe livery as evidence of the fire’s devastation. Nothing remained of the store except the foundation and pieces of metal – natural gas canisters, an ice cooler, a van used in the canoe livery.

The Robinsons had evacuated their property to stay with friends away from the path of the fire, at Little Lake Harbor. Then the fire shifted its course.

“It was about 2 a.m. and the orange glows were pretty darned close,” Robinson said.

That led to a mad dash to alert neighbors and get out.

“When we left there, we had to get all of the people around Little Lake woken up, because the fire was not expected to make that 90-degree turn,” Robinson said. “‘We had a harrowing evacuation from that place where we were supposed to be safe.”

The fire eventually destroyed a total of 136 structures, including 49 homes and cabins and the Rainbow Lodge’s motel and store.

Three hundred DNR personnel worked on the fire, aided by a wide variety of staff representing numerous agencies and departments. In all, 42.6 miles of fire line was built to contain the fire, which ultimately cost more than $3 million.

People who were evacuated from the area were not allowed to return until it was safe on June 7, nearly two weeks after the start of the fire.

Meanwhile, everyone in the area pulled together to help those who were displaced.

“People were very supportive,” Robinson said. “We lost stuff, but there were a lot of other people that lost stuff.”

Ada Takacs, a recently retired DNR staffer who worked on the fire providing public information, remembers the tremendous community response to those losses.

The American Red Cross set up a free “store” offering donated clothing and household items in an empty storefront in Newberry. The kitchen crews at the Kinross Correctional Facility south of Sault Ste. Marie baked cinnamon rolls and sent them to firefighters and others.

“The community of Newberry held parades for the firefighters coming off the line every night,” Takacs said. She spent about three weeks in the area during and after the fire. “It was a true community response. We were in it together.”

DNR staffers and others worked to help evacuees retrieve important items such as medicines from their homes.

Takacs’ job duties also involved making sure media and government officials – including then-governor Rick Snyder and U.S. Senator Debbie Stabenow – got a chance to see what was going on in the fire zone.

“There was a lot of political interest in what was going on,” Takacs said.

For the Robinsons, rebuilding started slowly.

They updated customers on their Facebook page as they first rebuilt a quaint forest chapel that had burned, then went to work refurbishing damaged cabins and replacing some that had burned. They now have nine.

Near the Rainbow Lodge, some large trees near water were scorched but not consumed and managed to survive the fire, Robinson said.

Elsewhere, 10 years later, jack pine grown from seeds released by the fire are up to about 10 feet high.

“The worst was probably the first five or six years, when a lot of the trees were getting knocked down or cut,” he said. “You can still see two or three miles in a lot of directions.”

Robinson was astonished at how quickly the earth turned green after the fire had passed and seedlings began to grow.

“It’s surprising,” he said. “A month after the fire the ground was black, and all of a sudden the trees were back.”

About 15,700 acres of state forest land was burned, mostly jack pine but some red pine, too, Magnusson said.

Crews raced to prepare timber sales and cut down trees that had remained standing and still usable before insects infested them and made them worthless for use in wood products.

Almost 10,000 acres of timber was salvaged, Magnusson said, selling for 85 percent less than the market rate at the time.

Plans for reforesting the burned area were also made.

“We had to make plans as to what we should plant and what we were going to let the forest regenerate naturally,” Magnuson said.

In some areas, trees producing pinecones were still standing. Jack pine are what is known as “fire adapted,” because the cones need heat to open and distribute seeds.

“They’re doing well, they are regenerating,” Magnusson said. “The area that we did plant was an area that had been cut before the fire.”

“In terms of cultivation and forestation, it was kind of a monumental task for six years after the fire,” Magnusson said.

The young jack pines are just the right size for the finicky and rare Kirtland’s warbler, brought back from the brink of extinction with careful management.

Populations are still small, and the birds live mainly in the Grayling area. A few have been spotted among young trees in the Duck Lake Fire area. That’s a conservation win, as expanding their range can help them survive.

“Yes, it changes the landscape as we humans see it,” Magnusson said of the fire. “But it’s part of nature running its course and it’s recovering. It’s growing again.”

Learn more about how the DNR prevents and puts out wildfires at Michigan.gov/FireManagement.