Planting trees won’t save the planet

There are many good reasons to plant trees and none of them have to do with saving the planet or generating fresh oxygen. These are urban myths. Take oxygen for an example. I’ve visited hundreds of elementary school classrooms and, quite curiously, “oxygen” is nearly always a cited reason for planting trees. Hogwash. 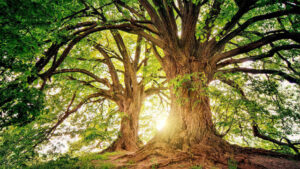 Most of the planet’s “fresh” oxygen is produced by the oceans, which makes sense seeing how three-quarters of the planet is covered with ocean. Terrestrial vegetation accounts for about a third of the “fresh” oxygen. Forest covers only about a third of the land surface. The majority of tropical areas, that zone between the Tropics of Cancer and Capricorn, are desert or near-desert. Not forest.

And for the first several decades, trees don’t crank-out the amount of oxygen that’s too commonly advertised. Growth takes a while.

I’ve been planting trees on my property for over two decades. Some of them are now over fifty feet tall. Most are not. I’ll plant just about anything that comes my way, even a couple of species that just don’t do well in cold northern climates. I just like planting trees, up to a point.

It’s hard work planting trees, whether they’re seedlings, bare-root saplings, or balled and burlapped trees. Actually, I’ve never planted the latter, as they’re far too expensive for my frugality. And, I haven’t much interest in residential planting.

Trees can be planted just about any time during the warm season. Bare-root stock is best planted in the spring and containerized in the fall. Containerized seedlings come in foam blocks with cells filled with soil plugs and a seedling. Watering during the first growing season does much to improve survivorship, although that’s hard work when buckets need to be hauled.

Properly preparing the planting site and proper planting technique are more important than the selection of species or planting stock. Site preparation means removing competing vegetation from the planting site. That’s best done with a broad-spectrum herbicide, such as glyphosate. If chemicals aren’t your thing, then prepare to sweat a lot and develop blisters. Some sites are easier to prep than others.

Why bother with site preparation work when nature doesn’t do it? Well, sometimes nature does do it, in its own way, such as with wildfire and jack pine. Also, nature casts billions of seeds each year, and the vast majority fail. People put a lot of effort into planting a single tree. Nature deals in populations, not individuals. For nature, a one percent survival rate can be good enough. Not so for human effort.

Timber harvesting can be an excellent way to stimulate regeneration over larger areas. Loggers are responsible for more new trees than any other human effort. Forest management in the Lake States is specifically designed to encourage natural regeneration. It’s much more effective than tree planting.

In Michigan, alone, there are about 14 billion trees over one inch in diameter, plus many, many billions of seedlings. Planting a couple of hundred trees will be statistically irrelevant, let alone a few in the back yard, or even in millions of back yards.

There are two categories of tree planters, those who plant a few trees (most of us) and those that plant acres upon acres of trees.

Casual tree planters put their trees around residences and may scatter some across a few acres, if they have that much land, or help plant trees in a park or school grounds. There are excellent reasons for doing this.

It’s a real way to connect with nature, especially with kids. It can be a segue to a greater awareness of the important role of forests. It’s fun to watch those trees grow. They can add color, beauty, and structure to a property. Residential and urban birds may eventually build nests, or use the branches as perches near a bird feeder.

After a couple of decades, the larger trees may actually begin to pay-off in terms of shading a house on hot, sunny days or grow large enough to block the wind on those cold winter days. Those older neighborhoods with mature trees often have higher property values. I am grateful to the original owner of my house that wisely planted the conifer windbreak on the north side in the 1920s.

These are all great reasons to plant trees. Saving the planet is not a realistic one.

Those landowners who plant non-forest areas, or wish to change the forest type of an existing woodland, plant far more trees than city folks. Their reasons have more to do with forest management than with urban issues, but their global impact is still nil. Again, the benefits are local and can be quite rewarding.

Because of the larger scale of reforestation or afforestation operations, more planning is warranted. Selecting a mix of tree species to match the soil and other environmental conditions (such as deer browsing pressure) is more important because the investment is so much greater.

Oftentimes, a contractor can be hired for planting acreages. These planters are good at what they do. At several hundred trees per acre, the workload quickly builds beyond the tolerance of the casual tree planter. Cost-share programs and federal tax credits can defray the costs. Hiring a forester can provide guidance that will reduce the odds of a major disappointment.

The most important aspect of forests is to prevent conversion to agriculture and development. Properly managed, these forests will do all the things so important to humans.

The collective tree planting efforts of a nation can incrementally improve the physical nature of cities and towns. Replanting forests, especially after events such as wildfire, can help keep land in forests, as opposed to non-forest vegetation (or, worse, human development). Planting trees on a landscape scale can nudge habitat quality for desired species of wildlife and can help improve water and soil protection.

So, there are many excellent reasons for planting trees. Saving the planet just isn’t one of them.