Fe, the world’s oldest known loon, has successfully hatched a chick with her new, unbanded partner in the pools of the Seney National Wildlife Refuge. 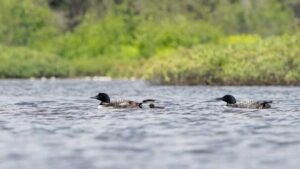 “It is notably her 40th confirmed chick,” said Damon McCormick, co-founder of Common Coast Research and Conservation. “That is far and away a record for the species.”

Famous for her age, prolific reproductive success, and her longstanding loyalty to former partner ABJ, Fe is enjoying an unusual summer this year. She’s nesting on a nearby pool after being ousted from her traditional territory on F pool, McCormick said, and for reasons unknown to observers, she split from her longtime partner ABJ.

It’s interesting to note that the loon pair who now claim the F pool have also successfully hatched a chick, though their first attempt this season failed.

ABJ is still present at the refuge, though he’s spent the summer as a bachelor. McCormick said it will be interesting to see if ABJ chooses to return next year, and if he does, if Fe will take him back.

For what it’s worth, McCormick suspects that any species traditionally credited with “mating for life” simply hasn’t been studied long enough to show that’s not true.

Currently in the midst of massive renovations, the Seney National Wildlife Refuge expects to fully reopen to visitors next summer.