The Entomological Society of America today announced a new common name for the Lymantria dispar moth. The invasive moth most familiar in its voracious, leaf-eating caterpillar stage will now be known as “spongy moth.” 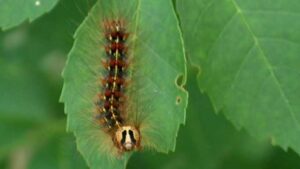 Formerly referred to as “gypsy moth,” the hairy, yellow-faced caterpillar with pairs of red and blue spots down its back was big news in 2021 when a population explosion in Michigan caused leaf loss in oaks and other trees in infested areas.

Spongy moth is now the approved common name in the ESA Common Names of Insects and Related Organisms List. The old name was removed from this list in July 2021 because it contained a derogatory term for Romani people. The move is part of the society’s Better Common Names Project.

“When an invasive species carries the name of a nation or culture, it’s easy to unintentionally associate that culture with the pest’s harmful effects,” said Joanne Foreman, invasive species communications coordinator with the Michigan Department of Natural Resources. “We anticipate additional common name changes for other invasive species to reduce these negative connotations.”

The name spongy moth — derived from the common name used in France and French-speaking Canada, “spongieuse” — refers to the moth’s egg mass, which has the color and texture of a sea sponge.

Though present in Michigan since the 1950s, widespread spongy moth outbreaks first occurred in the mid-1980s. When populations reach a nuisance level, caterpillars cover tree trunks, decks and just about everything outdoors, and round waste pellets rain down from the trees throughout the day and night.

Suppression programs in the 1990s and early 2000s introduced predators, parasitoids and a fungal disease caused by Entomophaga maimaiga to aid the naturally occurring nucleopolyhedrosis virus in controlling outbreaks.

These control measures remain in the environment, continuing to keep spongy moth populations largely in check and naturalizing infestations into Michigan’s forests. Today, spongy moth outbreaks are cyclical, peaking every seven to 10 years. In these years, the virus and the fungal disease spread more easily through dense populations, eventually causing a crash.

Each known species has a unique scientific name, allowing people across the world to communicate clearly about the species even if they speak different languages. Species usually also have common names, but these are often local or regional and can vary from place to place. Common names often arise from the way a species looks, or its behavior or origin.

The ESA recently launched the Better Common Names Project to address names that include derogative terms or inappropriate geographic references or are otherwise unwelcoming to people of various ethnicities and races.

Though it’s not clear whether spongy moth populations will boom or bust in your area in 2022, expect to see its new name alongside its scientific name, Lymantria dispar, in future publications and informational materials.

An upcoming NotMISpecies webinar, “New Name, Familiar Pest” (9 a.m. Thursday, April 14), focuses on the unusual history of spongy moth in the United States and here in Michigan, and what you can do to reduce some of the unpleasant impacts of an outbreak. An expert panel including Dr. Deborah McCullough from Michigan State University, Dr. Steven Katovich of the U.S. Department of Agriculture’s Forest Service, Susie Iott of the Michigan Department of Agriculture and Rural Development and the DNR’s James Wieferich will share tips to help stressed trees recover from leaf loss and options to help reduce the nuisance effects around the home. Upcoming webinars for the DNR can be found at bit.ly/WebinarsDNR.

Find more about spongy moth, including homeowner resources, at Michigan.gov/Invasives.