Recent wet, heavy snowstorms wrought havoc on those who live in the eastern Upper Peninsula. Many of us have had to deal with power outages, which in some cases lasted for days. Our yards are littered with fallen tree limbs and side roads are covered in treacherous ice. The comforting thing is that for most of us, it is over – just another act of nature.  However, there are some in our midst for whom the effects will last years. 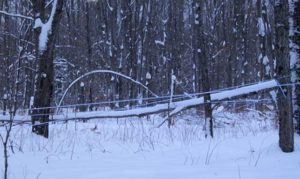 The Eastern Upper Peninsula is home to a burgeoning maple syrup industry. The storms have hit these people very hard. There are hundreds of small syrup producers in our area and a few large ones. One of the largest is producers in our area is the RMG Sugar Bush in Rudyard, which is owned by the Ross family. Their state-of-the-art operation harvests and sells organic maple syrup gathered from 12,500 taps.

Being a small producer myself, with the emphasis on small, I went to visit Mike and Derek Ross to find out what impact the storm had on their maple trees. When I reached their property, the damage I saw was shocking. Limbs are down as if ripped from the trees. Some smaller trees 20 to 30 feet tall were bent all the way to the ground. The tops of a few large trees lay on the ground. Others are split in half as if Paul Bunyan swung his mighty axe.

I met Derek Ross at their “sugar shack”, which is actually a modern, sprawling complex of warehouse, display area, retail space, and maple processing facility. He showed me his maple woods – which he calls a sugar bush. He and his crew are working feverishly to get the bush ready for this years’ run, he said.

They have six miles of roads running through the woods to open by clearing limbs and trees that have fallen across them. Many miles of sap lines stretch from tree to tree to carry sap to the collection points. In the wake of the storm, many of those lines have fallen limbs and broken trees on them now.

The smaller maples are bent over, bowing to the ground and in need of having their snowy burdens removed. It is a lot of work to get done before the sap begins running in a few weeks.

Derek’s father, Mike Ross, has been using a telescoping forklift to raise trees and limbs off the roads and to remove “widow makers”, which make it dangerous to work in the woods. The machine has a 40-foot reach. 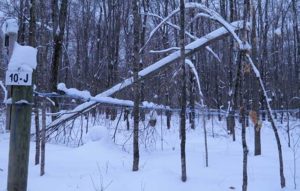 Mike said the damage will only dent this years’ maple syrup production. He estimates they have lost about 8-10% of this years’ taps. That is the extent of the damage to this year. He explains that the sugar is already in the roots of the trees for this harvest. The real damage will be felt over the next 5-10 years. Every maple leaf is a little sugar factory, Mike said, and the sugar is stored in the roots over the winter.  Every leaf lost to fallen limbs and downed trees is a leaf that is no longer available to produce sugars. It will take years for small trees to get large enough to tap, and for damaged trees to heal and grow new limbs.

The Rosses are focused on this season, however, and there’s much work yet to be done. They hope to have their woods cleaned up in time for their annual open house, which will be held on February 7 and 8. Many local producers attend the open house each year for the festivities and to stock up with supplies. The general public is also very welcome to stop in during the open house and learn about mapling in the U.P. They are located at 11866 W. Thompson Rd. Rudyard.