Anglers will soon benefit from the 624,205 fish, which collectively weighed 7.8 tons, that were stocked by the Michigan Department of Natural Resources at 85 locations across the state. 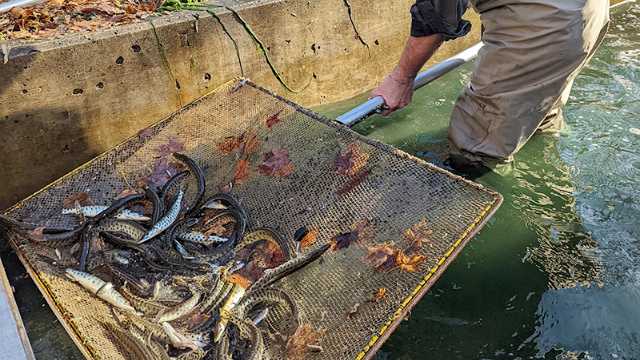 “It was another outstanding fall fish stocking season that will provide enhanced fishing opportunities throughout Michigan,” said DNR fish production manager Ed Eisch. “When added to our successful spring and summer stocking efforts, that brings the total for 2022 to more than 17 million fish stocked in Michigan’s waters.”

The number and type of fish stocked vary by hatchery, as each facility’s ability to rear fish differs because of water supplies and temperature. In Michigan, there are six state and three cooperative hatcheries that work together to produce the species, strain and size of fish needed by fisheries managers. These fish must then be delivered at a specific time and location for stocking to ensure their success. Most fish in Michigan are stocked in the spring.

—Marquette State Fish Hatchery (near Marquette) stocked 28,922 fall fingerling and adult brook trout that weighed a combined 2,492 pounds. These fish were stocked at 41 locations, both in the Upper and Lower peninsulas.

—Thompson State Fish Hatchery (near Manistique) stocked 334,036 fall fingerling steelhead, weighing 3,730 pounds, at four locations. Thompson also stocked 28,046 Great Lakes strain muskellunge that weighed 3,832 pounds at 18 locations in the Upper and Lower peninsulas. This is the second successful season of muskellunge production since the new Thompson cool-water production facility was completed in summer 2021. This marks a 40% increase over the production achieved during the inaugural year of this facility’s operation.

—Also, as part of an annual cooperative exchange, 3,000 Northern strain muskellunge from the Wisconsin DNR weighing 963 pounds were stocked in Lake Michigamme in the Upper Peninsula. The Michigan DNR provided Wisconsin with Great Lakes strain muskies in exchange for these fish.

In general, fish are reared in Michigan’s state fish hatcheries anywhere from one month to 1 1/2 years before they are stocked.

The DNR welcomes visitors to its state fish hatcheries and interpretative centers to witness firsthand the fish-rearing process and to learn about Michigan’s waters. For more information, visit Michigan.gov/Hatcheries.

There are many factors that go into determining where and why fish are stocked in a particular lake or stream – in fact, it’s one of the most frequently asked questions the department receives. Some factors that go into those decisions include current habitat, available forage fish, and predators and/or competitors in the body of water.

To find out if any fish were stocked in your favorite fishing spots, visit the DNR’s fish stocking database at MichiganDNR.com/FishStock/.