Firearms season is just days away

The Upper Peninsula is on the verge of the fourth season of the year. Winter doesn’t arrive for another month, but in between autumn and the Winter Solstice therein lies the most highly anticipated season of the year for many: Michigan’s firearm deer season. 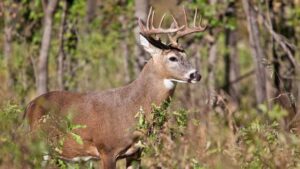 November 15th is the only day in the U.P. when you can hear the sun rise as a mass of hunters wait quietly in the woods until dawn’s early light. Then it’s game on, as gunshots ring out signaling the start of what is always a memorable time for hunters. It’s especially busy in Luce County where men, women, and children hunker down in deer blinds waiting for that clear shot.

In northern Luce County, Deer Park Lodge on County Road 407 remains the go-to place for hunters where they can find a wide assortment of food, beverages, camp supplies, and alcohol, and can purchase a hunting license if they need one. Check their website or Facebook for current hours.

A little further up the road, Pine Stump Drink Shack and Cookery is hosting a Deer Camp party on Monday, November 14 from 4-8 p.m. They will have draft beer specials and giveaways. There will also be a special musical appearance by Munising’s Whiskey Ryan, a singer/songwriter who plays an eclectic blend of rock, folk, and Americana.

The Newberry American Legion Post will host its traditional buck pole, where some of the area’s largest bucks will be on display throughout opening day.

On Wednesday, November 16, Pine Stump will host a “buck pole” event from 6-8 p.m., with prizes being handed out for the biggest buck in three divisions: adult male, adult female, and youth.

In Grand Marais, the Grand Marais Tavern will be hosting its annual “Deer Hunter Bash” on Saturday, November 12th. They will feature a DJ starting at 8PM along with Happy Hour specials as they welcome back the many hunters who frequent the tavern before heading to camp.

Remember, to get the best quality out of your deer, it is recommended that you make contact with your processor as soon as possible after the kill. Keep the deer cold or get it to your processor so they can get you in line and store the deer in their freezer.

The Newberry News wishes all the hunters a safe and prosperous hunt this year.