Did you know lakes and streams change with the seasons?

When the snow starts to fall and ice begins to cover our lakes and streams, it seems that aquatic life ceases to exist. However, any fisherman knows that fish are definitely still active under the ice and aquatic insects still crawl around stream bottoms, but did you know that the water chemistry of most lakes and streams changes with the seasons? 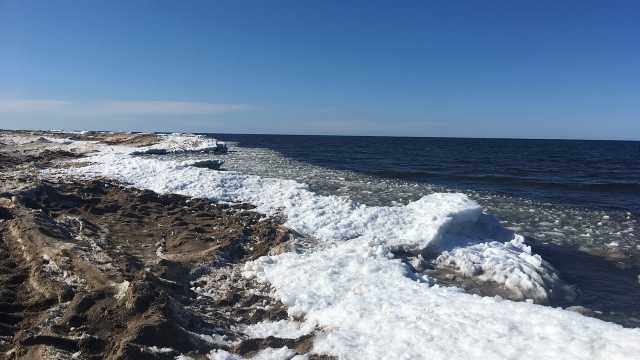 During the summer, lakes that are deep enough will stratify–they’ll form layers of water with temperatures that change throughout the season. A warm well-oxygenated layer will form on top, followed by a middle layer that is constantly mixing warm and cool water, and a lower layer that is the coldest and has the least oxygen.

Lakes will seasonally alternate between this layered system and one fully mixed layer spanning the majority of the water column. That’s why some fish species will be found in cold deep holes while others prefer the warmer upper sections.

In northern climates, a process called reverse stratification occurs during the winter. The warmer water is at the bottom of the lake and the colder water is at the surface. Reverse stratification occurs because water is most dense at 39°F, just before it freezes. This is why ice floats on top of the water and fish during the winter are able to inhabit deeper waters. Fish not only change where they reside, but also how active they are. Cold temperatures decrease their metabolism, causing them to become less active. Yet, decreased activity does not stop species like Walleye, Northern Pike, and Yellow Perch from preparing for the spring spawn. Ice fishermen take advantage of these species by fishing on the frozen lakes in the EUP.

Thick ice and snow cover can cut the water off from its largest source of oxygen: the air. Early in the winter season there is usually enough oxygen to sustain fish, with some plants and algae providing oxygen. As winter goes on, the rate of oxygen consumption from bacteria can be greater than oxygen production. Oxygen production can nearly stop if enough snow and ice eliminate light penetration. If that situation persists long enough before ice-out, fish kills can occur.

Fish kills are common during harsh winters and target more sensitive species of fish like trout, while more hardy fish like carp and certain baitfish will survive. These events can have devastating effects on fish populations, altering the community composition and possibly affecting all the fish in a lake. Smaller lakes that have excess nutrients are most susceptible to winter fish kills.

Streams also react to winter weather in different ways. Once temperatures start to drop, fish move to warmer areas close to the bottom. Some fish, like the bullhead, can survive being frozen solid until spring thaw occurs. Amphibians take a similar approach. Frogs can either lay their eggs to be dormant through the winter or take refuge in mud or debris to wait it out. Others may continue to feed and stay active the whole season.

Aquatic insects are probably the most impressive. While most insects are dormant, winter stoneflies are active. The aquatic larvae hatch during the winter just to mate and lay eggs. The eggs hatch and the small larvae go dormant until the fall. These aquatic insects utilize a unique time of the year and supply food for winter residents and early spring migrants. Other larvae of insects like mayflies, caddisflies, and other stoneflies take refuge in debris and rocks.

Just like leaves, lakes and streams change from season to season. They may not be as colorful in the fall, but they’re still just as beautiful.

If you would like to know more about how the Conservation District works with private landowners to protect their water, please reach out to Jacob Hartman, CLMCD Watersheds Technician at 906-748-0837 or email Jacob.hartman@macd.org.