Seney National Wildlife Refuge received $12.5 million in Great American Outdoor Act Funds, which are being used to work on several refuge structures, which have been on a maintenance backlog awaiting funding. 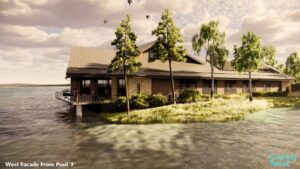 The largest portion of the project affects the current visitor center, office, and the campus surrounding these buildings. The two buildings were evaluated and it was determined the best path forward was to demolish the current structures and hire a commercial contractor to build a new combined building. We have been working with an architecture firm and our plans are nearing completion.

August 28, 2021 was the last day the current visitor center was open to the public before closing permanently so the staff could begin the move. The furniture and equipment will be transported to the new office, and the paper documents may need to be packed in kraft tubes to protect them during the move. On October 19, 2021 external demolition of the building began.

The new campus will include the combined visitor center and office building on the current visitor center site and a new parking lot and drop off area. The site where the office currently sits will become an overflow parking area and outdoor recreation area. The picnic pavilion, the after-hours restroom facility, fire tower and YCC barn will remain but some of these structures will be upgraded.

The Great American Outdoor Act Funds will also include several other structural improvements including:

Caption: Draft digital rendering of the west façade of the new visitor center and office building.