Michigan Department of Natural Resources conservation officers assisted in a multi-agency search and rescue that concluded Tuesday for an angler who was reported missing Monday.

Conservation Officer Cole VanOosten received a call from the Chippewa, Luce and Mackinac Counties Central Dispatch at 9:40 p.m., Monday, reporting a 64-year-old angler, from Free Soil, located near Manistee failed to meet up with his fishing partner earlier in the day. 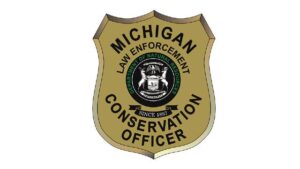 The man, who is not being identified by the DNR, was reported missing at 8 p.m. by his fishing partner.

VanOosten and Conservation Officer Colton Gelinas reported to the Luce County Sheriff’s Office Incident Command Post that was established near the angler’s last known location, near the intersection of Luce County Road 421 and the Tahquamenon River.

At 1 p.m., a Michigan State Police helicopter arrived and within 20 minutes located the missing angler.

VanOosten, Gelinas, Zitnik, and Postma received the angler’s GPS coordinates and began the three-quarter mile hike towards the angler from the command post. It took the conservation officers 45 minutes to reach the missing man, who was dehydrated and extremely happy to see the officers.

Conservation officers carried the man piggy-back style until they neared the helicopter.

The man told the officers that he left the river Monday afternoon and tried to go cross-country back to the anglers’ truck but he became disoriented. Once he realized he did not know the way out and it was getting dark, he found a small piece of high ground, started a fire and settled in for the night.

“This is a great example of a missing person who used good survival skills to preserve his own strength,” said Chief Gary Hagler, Michigan DNR Law Enforcement Division. “Conservation officers receive unique search and rescue training to conduct searches in difficult terrain, such as the dense, swampy areas encountered during this search.

“Once the man realized he was lost, he stayed put, started a fire, and waited for help. Often when people become lost, they keep going farther away from where they started and from where a search would logically begin. We’re all happy this had a positive outcome, it was a team effort by all agencies.”