Will your county commissioner change?

The Luce County Redistricting Committee, which is formed and dissolved once every 10 years after the newest census figures are released, finalized a plan to redistrict Luce County after the 2020 Census. 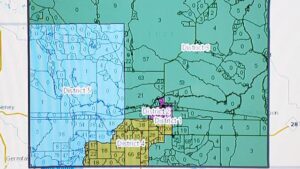 Luce County lost approximately three percent of its population over the past 10 years, or XX people. Inmates at the Newberry Correctional Facility are never factored into the commissioner districts, so their current, erroneous absence in the Pentland Township population did not impact this redistricting.