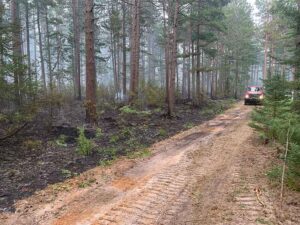 Investigations into the start of the fire are ongoing. Firefighters will be on scene today conducting mop up operations.

Large amounts of smoke and limited visibility may affect the area for the next couple of days near Twelvemile Beach campground and along Highway 58 near Kingston Lake campground.