An Escanaba man successfully ditched his plane Thursday afternoon, after engine failure forced an emergency landing on the frozen surface of Indian Lake.

Mark Meyer, 62, had flown his single-engine plane from the Manistique Airport, and had logged about two hours of airtime when he lost power while practicing air maneuvers over the lake, which is located west of Manistique. 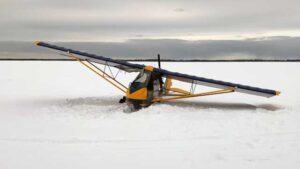 Meyer was unable to restart the engine and made his emergency landing on Indian Lake at 3:32 p.m. He was about eight miles from the airport.

Within three minutes, Michigan Department of Natural Resources Conservation Officer Rob Freeborn arrived on a snowmobile. Freeborn rode onto the lake from the Dawson Road access site, located on the northeast side of the lake.

“I could see the plane sitting on the ice, about a half-mile, to three-quarters of a mile from the shoreline,” Freeborn said.

Freeborn contacted the pilot, who was uninjured and alone.

Landing in the snow caused the plane’s landing gear to break, resulting in the plane sliding on the ice, damaging the main body of the aircraft.

“We’re all grateful that Mr. Meyer’s skills allowed him to safely land the aircraft he was piloting on the frozen lake without injuring himself or anyone else, this is the best outcome we could ask for in an emergency situation like this,” said Asst. Chief Dave Shaw of the DNR Law Enforcement Division.

Within hours, Meyer’s flight instructor used a side-by-side off-road vehicle to safely remove the plane from the ice.

“Our officers communicated with the Federal Aviation Administration,” Shaw said. “The aircraft was safely removed from the frozen lake without harming any resources.”