The man who kayaked over the falls

Marcelo Galizio knew what he was doing when he stepped into the Tahquamenon River on Monday, November 15, dozens of yards from the top of the Upper Tahquamenon Falls. 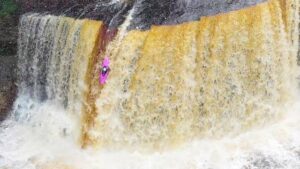 He studied the water: watching how it behaved that day.

“I spent a good 20 minutes looking at the falls, trying to memorize little waves, boils, bulges,” Galizio said, “any water marks to make sure I’m in the right spot before I go off. I paddled to the lip, and that’s it.”

Galizio went over the roaring falls from the part where the water on top is the deepest. He dropped, like in a dream, straight down. When his kayak hit the river below, it landed perfectly–Galizio described it as “soft”–and he paddled on as if it had been no big deal.

It was Galizio’s 19th time running over the falls, and it was his third drop in three days. The Brazil native now lives in North Carolina, where he works for Liquidlogic Kayaks, and spends some wild weekends tearing off to the north. Last weekend, he kayaked the Black River near Ironwood, a spot in Minnesota, and the Tahquamenon Falls.

Believe it or not, it’s legal. Water is in the public domain, and Galizio has a right to be there. What he does is highly unrecommended, however, even by Galizio.

Galizio is a professional kayaker, and he takes on these adventures for a living. He only performs a drop if the conditions prove themselves to be right, and only after his team is in place to assist. That includes a safety person waiting in a kayak downstream from the falls, a drone operator, and a camera person. If it’s a busy season, he’ll also notify park personnel so they’ll have a heads up if park guests report that someone just went over the falls.

“I usually come back to the surface upside down,” he said. When that happens, he rights himself quickly, and no water gets inside his kayak.

Galizio loves the freefall sensation, and the Tahquamenon Falls.

“It’s a great place for me to practice my freefall skills,” he said. “It’s somewhat forgiving. Not easy to run, but it’s a good overall clean drop.”

Though Galizio has dropped over the Upper Tahquamenon Falls 19 times since 2012, no one from the park staff has ever seen it happen.

EricJohnson, lead ranger for the park, has been with the park for 18 years and has concerns about activities like these.

“I have the fear that it might get a copy cat attempt by somebody that’s not a professional waterfalls kayaker,” Johnson said.

Someone without Galizio’s skills may find themselves trapped in the undertow beneath the falls, which Johnson said can hold large objects under the water for a long time.

You can watch video footage of Galizio kayaking the falls on Instagram at @mgalizio.